It’s not long now until we begin our, pardon the pun, landmark event : The Legends of Runeterra Masters Europea – Chronicles of Targon. The exciting event will see the top players on the continent come together to form teams and represent their country.

After a tense qualification phase, the competing 16 countries and their squads have been locked in. Those players will team up to compete for national pride as well as a lion share of the prize pool – the winners will take home $15,000 while 2nd will secure $6k and third will earn $3k.

Who will graduate from the University of Piltover with big-brain plays and who will end up at Slaughter Docks? You won’t want to miss a second of the action so in preparation for the tournament, let’s take a look at who’s qualified and what we have to look forward to.

Kings of the mountain

The best players on the European server spent weeks grinding out ranked games to climb the ladder* and earn their country a place in the tournament. After doing so, the second and third highest ranked players from the same nation joined them to form one of the 16 superteams. The rosters of which you can see in the graphic above/below.

Qualification went right down to the wire with the rankings changing every day and some countries experienced a spectacular level of competition for their three places.

Take a look at Germany, for example, who had four players in the top 10 rankings of Masters. Spare a thought for Nawatix who, despite ranking 6th on the ladder at the time of the deadline, will not be able to compete as Tilted2211 beat him by just one place. Completing the fearsome German roster will be Gamebreak0r took 2nd and regular streamer freshlobster who finished 3rd following a seven-game win streak.

And another team to keep your eye on will be France as Elyx secured the top spot on the ladder while his teammates, flaxeau and 0wiiiii, also had strong showings, finishing 23rd and 29th respectively.

Also commiserations to Turkey who just missed out on qualification despite securing 37th, 40th and 42nd place finishes as Czechia secured the final spot in the tournament following pokrovac’s 24th placement.

Even if your country didn’t qualify, there will still be plenty of exciting teams to support. You can cheer on your favourite content creator or if you want to support the underdogs then look over to Latvia who qualified thanks to Akarey who ranked 20th while his teammates finished 505th and 820th place.

All teams have a very good chance of making it through, anything could happen in our first ever European tournament.

The group draw has been completed as we now know the early match-ups we have to look forward to. 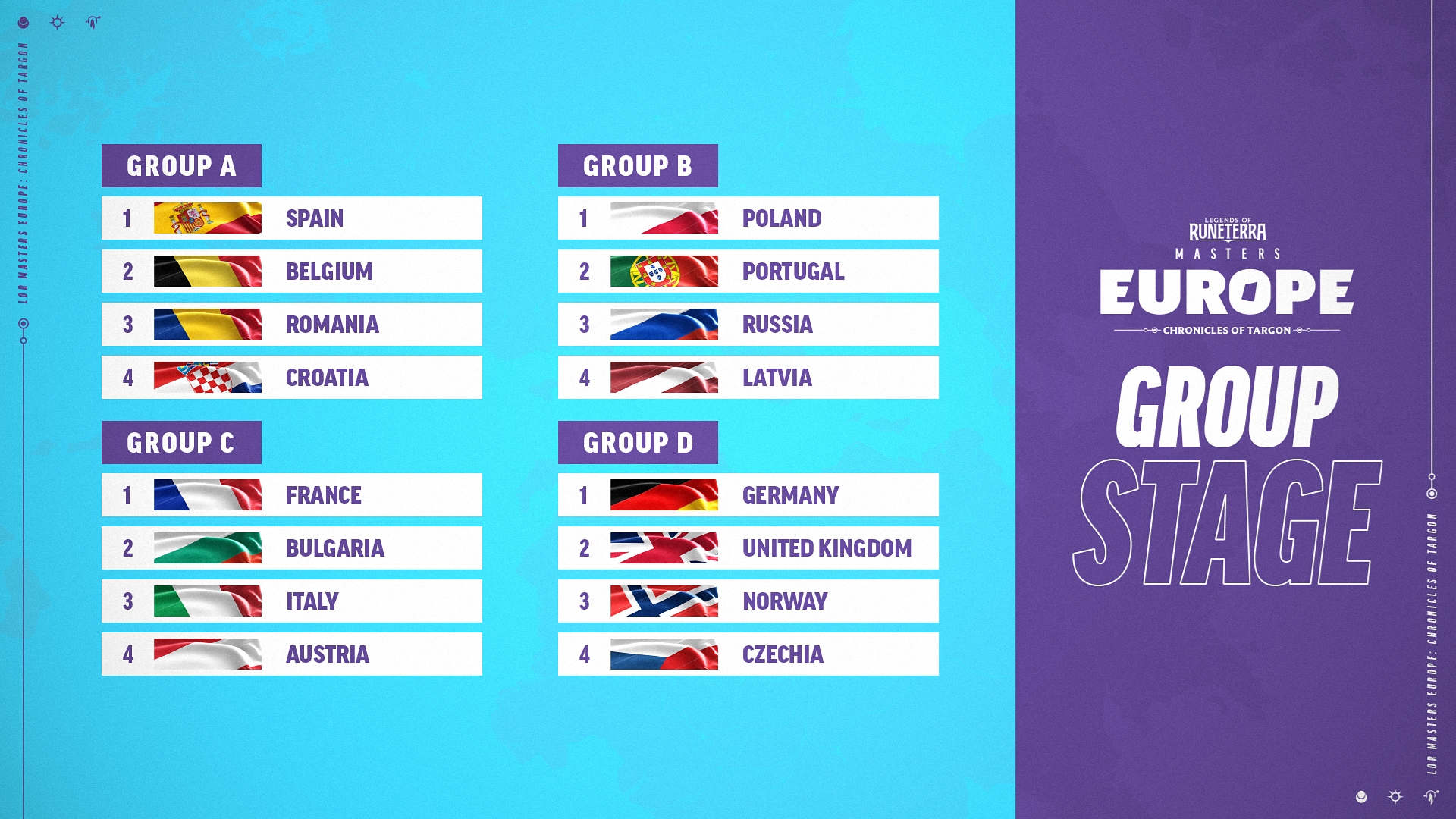 The 16 teams have been randomly placed into groups of four where they will all play against each other twice with the top two teams of each group advancing to the Quarter-Finals.

Teams will have to come together to create nine competition-ready decks that they will each have to pilot. Games will take place as best-of-five series but this won’t be like the Noxkraya Arena. Seeding will not determine match-ups but rather teams will decide amongst themselves which player they want to pilot their selected deck for each game – though the remaining two will be able to coach from the sidelines. If a team cannot agree on who should play the captain, aka the highest seed from each country, will have the final say.

Only the champions of each deck will be revealed before each series and teams will have a chance to ban three of those champions away from their opponents’ arsenal. Then once a team has won with a deck, they will not be able to use it again for the remainder of the series.

Working together will be a crucial ingredient to being crowned the Chronicles of Targon champion. So each team will have to develop synergy that can rival LoR’s newest fearsome duo, Soraka and Tahm Kench, if they want to acquire the taste of victory.

The LoR European Cup Group Stage will take place over three consecutive weekends, starting with games on the 7th and and 8th of November before more Stage 2 on the 14th and 15th then Stage 3 on the 21st and 22nd.

From there eight teams will advance to compete in the Quarter-Finals on Saturday November 28th before the grand finale with the Semi-Finals followed by the Final on the 29th where we will crown our inaugural champions.

There’s not long until the action kicks off so we hope you’ll all tune in to cheer on your nation, watch the best players in the region face off and find some inspiration for your own deck building ventures. And who knows, maybe we’ll be seeing you in our next tournament!