New Expansion – Beyond the Bandlewood

Time for a new adventure – the Bandle City region launches in this patch, along with 126 new cards, including 9 new champions, new keywords, an Event Pass, and much more in our latest expansion – Beyond the Bandlewood!

Beyond the Bandlewood arrives in patch 2.14.0, which will be playable at approximately 11AM PT, August 25.

Bandle City embodies the spirit of whimsy and adventure, with magic, tricks, and multi-region cards – cards that can be one region or another. When building a deck with such cards, the only requirement is to have a single-region card from either of the cards’ two regions. We can’t wait to see what kinds of combinations you’ll come up with for all the friendly Yordles across Runeterra!

ver the past weeks, we’ve been revealing all of the cards being added in Beyond the Bandlewood. Head to one of the galleries below to get the full list of new cards, and start your theorycrafting!

Beyond the Bandlewood introduces two new keywords, Impact and Manifest, and a number of new cards revolving around them. 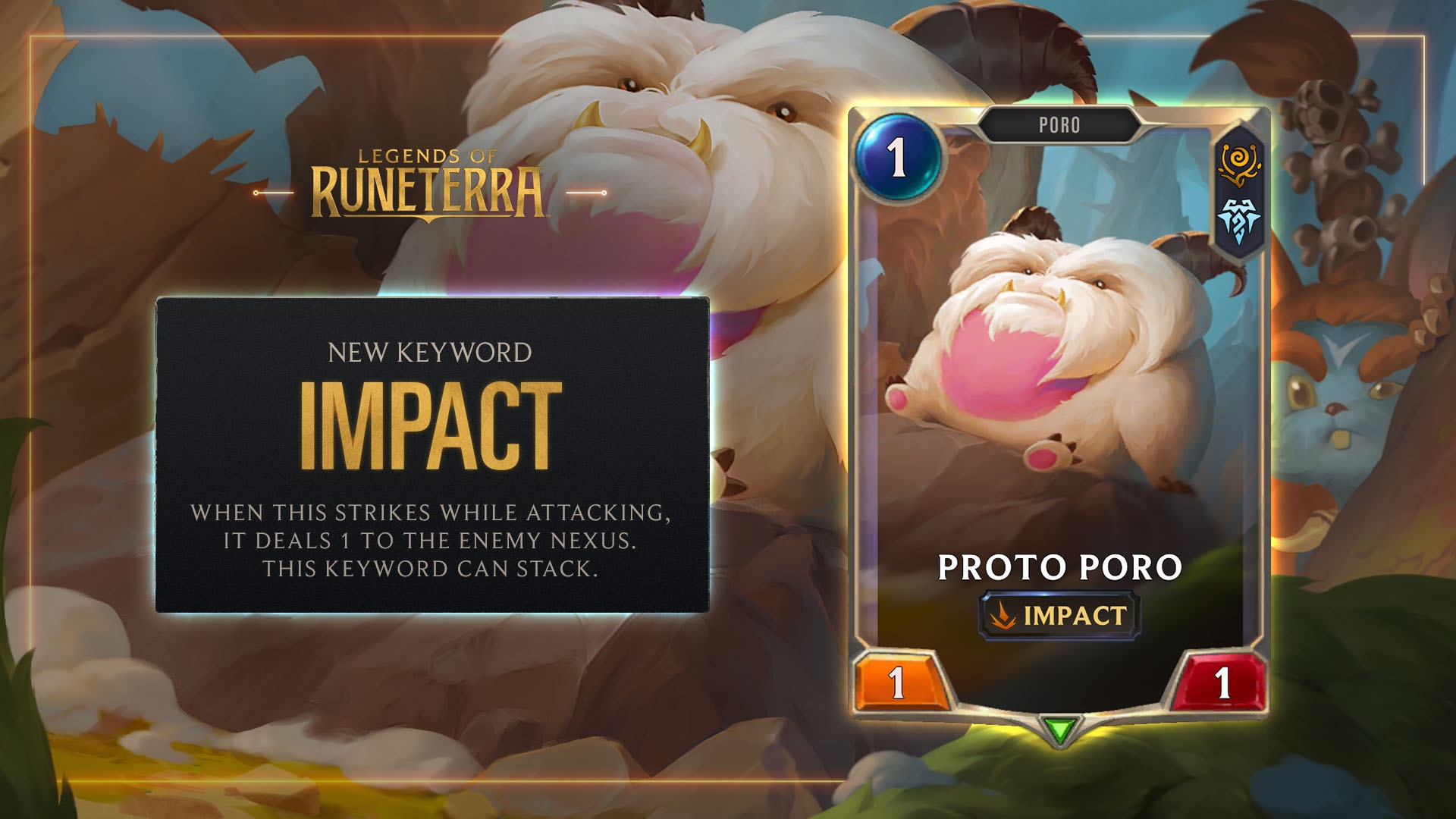 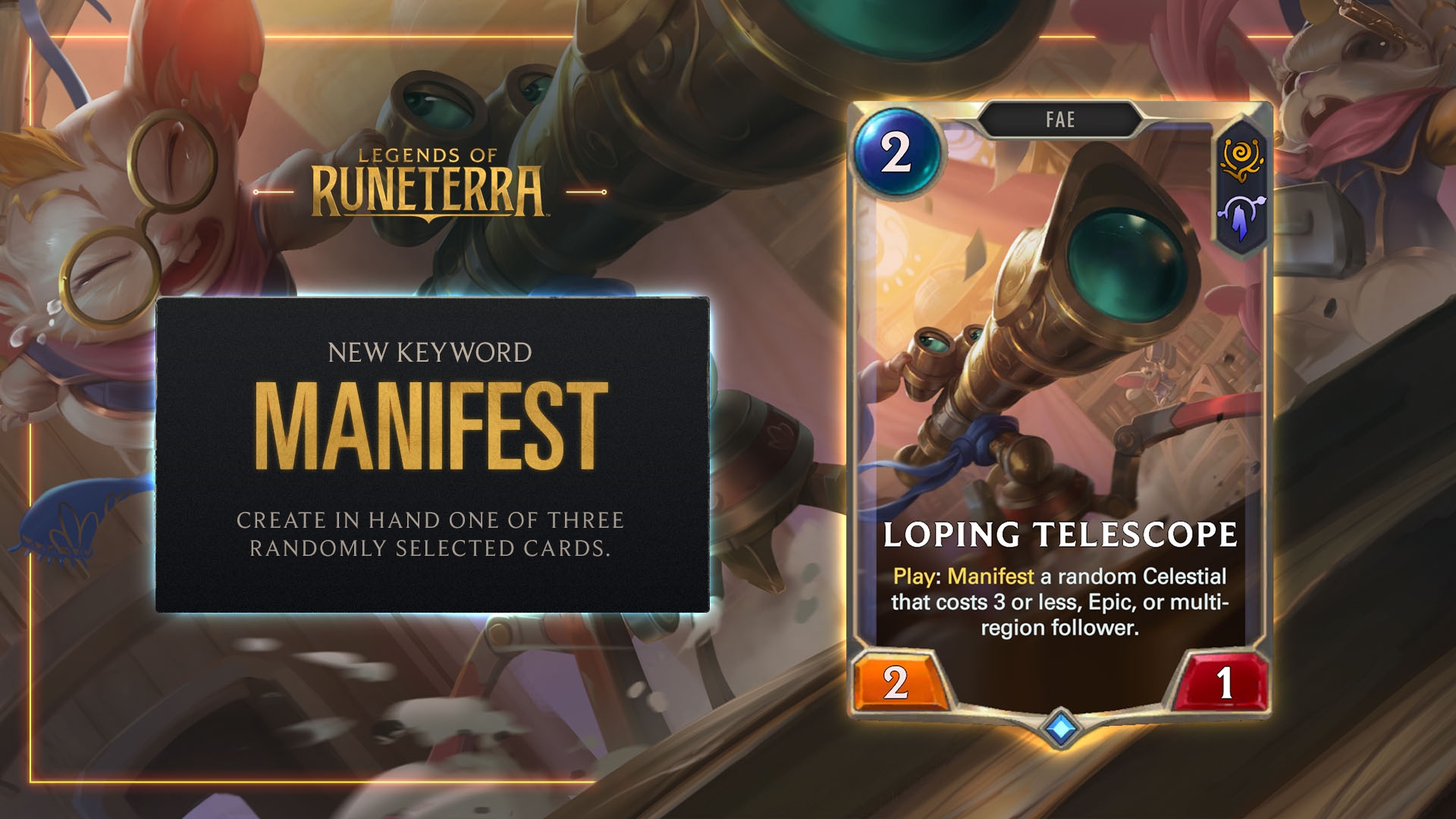 Manifest embodies the spirit of adventure in Beyond the Bandlewood, letting you choose between three cards chosen at random (within specific parameters, depending on the card used) when the effect is activated.

New Challenges and Quests have been added to introduce the keywords, archetypes, and champions being added in Beyond the Bandlewood. AI decks featuring Bandle City, as well as other cards added in the expansion have also been added to the Vs. AI opponent pool.

As we mentioned in the 2.11.0 patch notes, we don’t generally time live design updates during new card release windows. With 126 new collectible cards and a few entirely-new archetypes added in this expansion, Beyond the Bandlewood is our largest expansion yet, so we’re keeping a close eye on how various decks perform before making any changes.

Looking forward, our next batch of card updates is planned for Patch 2.18.0, on October 20, but it’s possible we might see some small updates between now and then. We’ll be sharing more information on our card update cadence and philosophy moving forward around that time as well.

There’s a lot to play with in this expansion, so we’re looking forward to seeing what decks emerge in the coming weeks!

The following personalization items are available in the Store or on the Beyond the Bandlewood Event Pass. 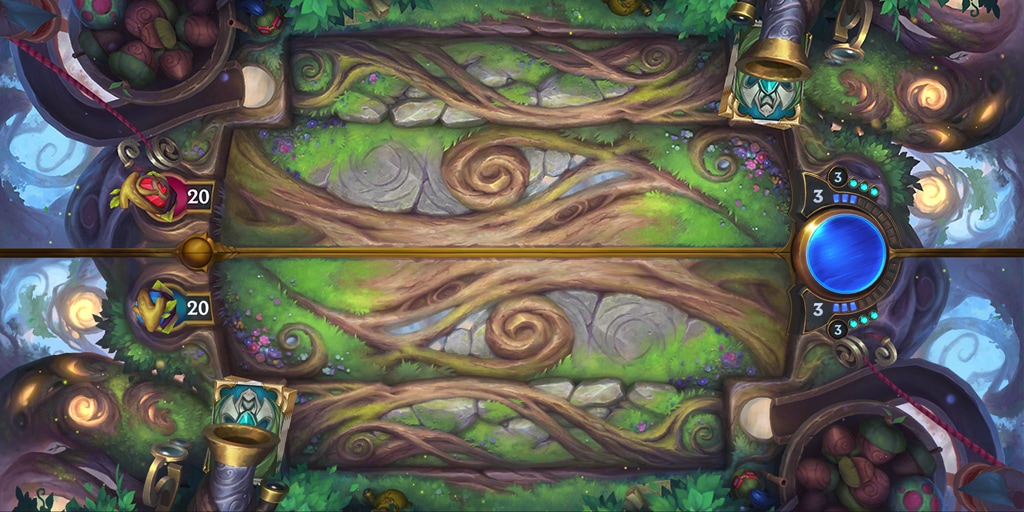 For legends who seek out hidden realms.

Look in the right places to unearth this board’s wondrous secrets. This board has interactive elements, special visual effects, and music.

Loves: The smell of gunpowder

Beware of the dog.

Loves: Taking life at his own pace

Lives: Underneath the bramblefoot tree

Quiet, or you’ll scare it away! 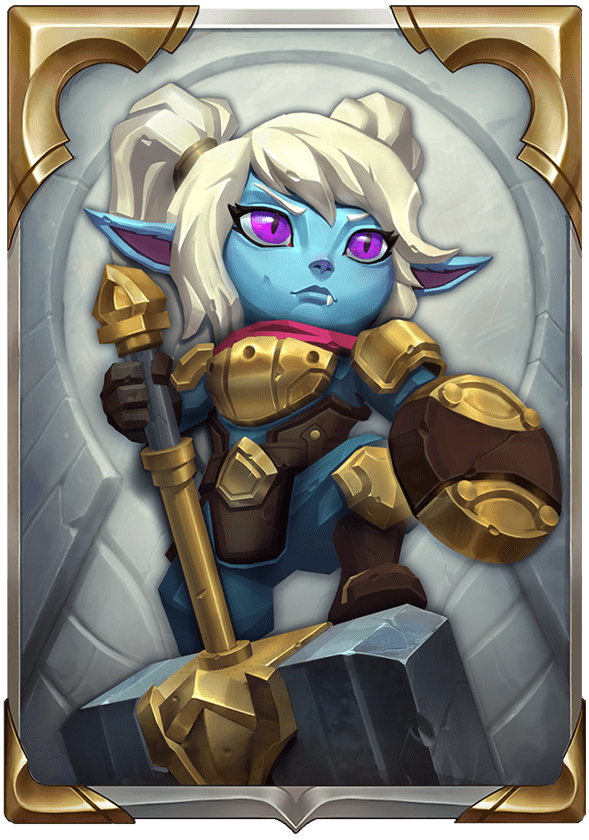 Keeper of the Hammer 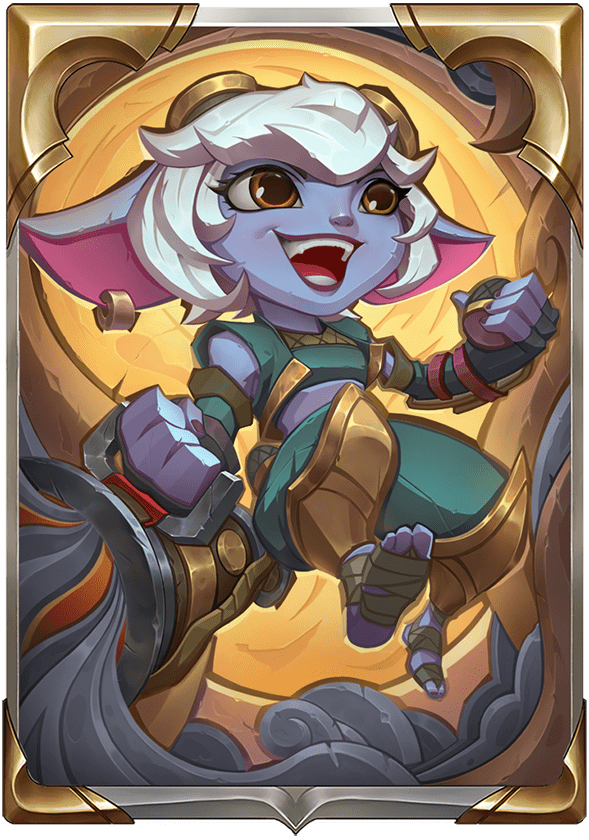 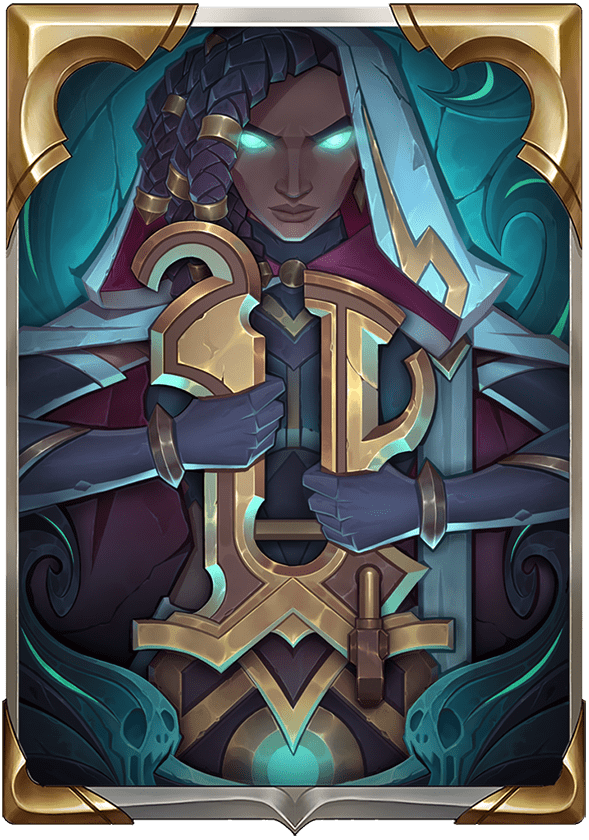 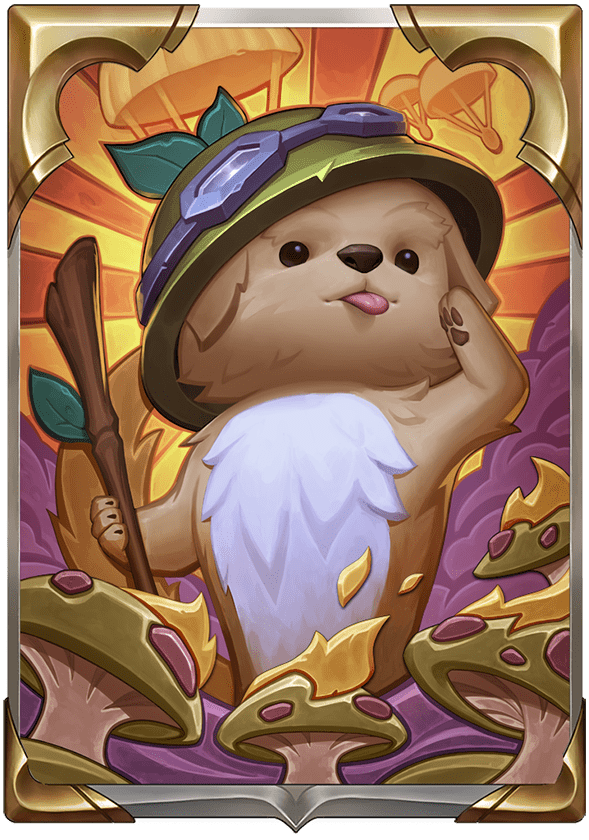 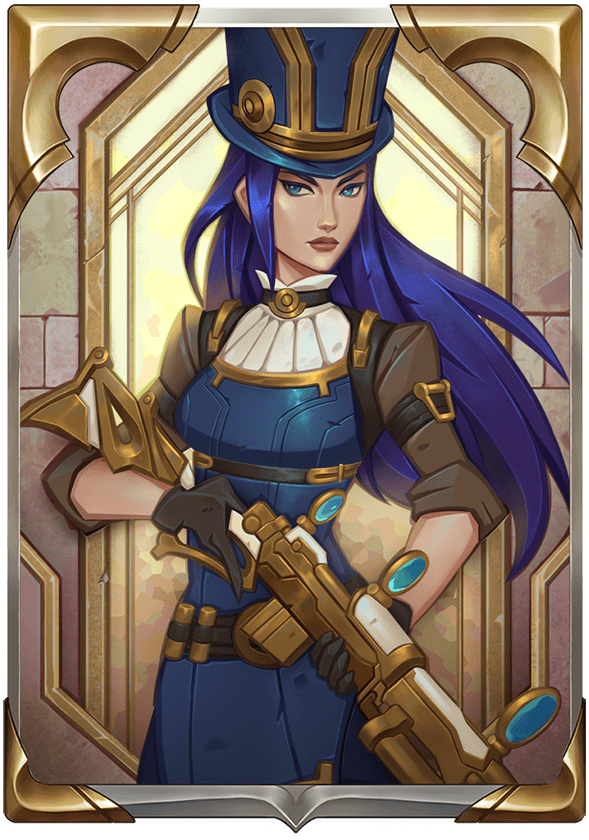 The Sheriff of Piltover

“What do you mean the hero isn’t here?!”

Few can find the way. Will you discover what lies beyond?

The event pass grants access to an upgraded event path with premium rewards, and immediately unlocks the Puffcap Pup Guardian. All unlockable rewards can be viewed on the Event rewards road. Purchase before September 8 to get an exclusive quest that awards 10 Acorns and a Rare Prismatic Chest!

The fight for glory starts now. Celebrate with this FREE bundle!

Includes the World Championship Icon and Card Back.

Wanderlust in your blood? Traverse the world of Runeterra to make an Impact with this Bandle City deck. Enlist multi-region units and allies from other regions to unlock the Bandle Tree’s magic.

Disrupt your enemies’ flow with Piltover removal and a neverending parade of puffcaps. They won’t even know what hit ‘em.

For the release of Beyond the Bandlewood, we’re adding eight new archetypes to the Expeditions pool, featuring the new champions and strategies highlighted in this expansion, and new cards have been added to existing archetypes as well.

Additionally, all archetypes from Rise of the Underworlds have had their offering bonuses normalized.

Beyond the Bandlewood archetypes will temporarily be four times as likely as they would otherwise be to appear in the initial Champion Picks. We’ll even out these chances in a later patch.