Gauntlets are limited-time competitive modes with unique deckbuilding rules. The Gauntlet will open every Friday through Monday, with each weekend featuring a single format from the Gauntlet rotation.

The first Gauntlet begins June 26 and will use standard deckbuilding rules as we test-drive the underlying tech; a second type of Gauntlet, Singleton, joins the rotation on July 3, and will challenge you to build a deck using no more than one copy of each card.

In addition to XP based on your number of wins, everyone who takes on a particular Gauntlet format will receive a special icon, while those who make it to seven wins will earn the exclusive Gauntlet Conqueror icon. In the future, we plan to add more exclusive rewards and improve the Gauntlet mode overall, using the technology to build our way to full-scale in-game tournaments.

Up until now, Masters tier has been rank-ordered by player MMR, but we’ve realized this has some unfortunate downsides—mainly that it was unclear how much your rank could change in a single game, and losses could feel overly punishing.

Now, instead of displaying your rank order within Masters, you’ll see your current Masters LP, and upon first entering Masters, you’ll get an initial LP amount based on your MMR relative to other players in Masters. From there, your LP gains and losses will be determined by a combination of factors including your MMR, your opponent’s MMR, and how much LP you have compared to other players in Masters. These values are centered around 20 LP (the same amount of LP gained or lost in Platinum and Diamond) and can range from a maximum of 25 to a minimum of 15. At the end of each season, Masters players will be reset to Platinum 4, regardless of how much LP you have.

Our hope is that this brings much needed clarity to the ranking process while keeping Masters tier the apex of competitive play in LoR. Let us know how the new system feels, and good luck making it to the top! 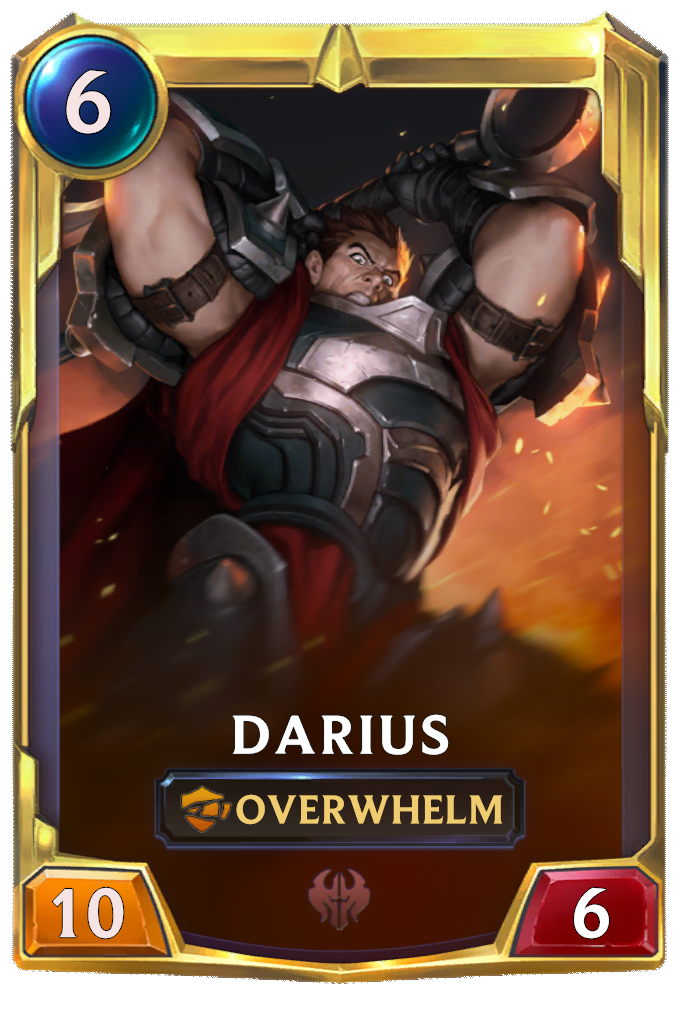 We’re increasing Darius’ health at Level 2 to make him more durable and consistent, increasing the payoff for meeting his level up condition and giving Noxus aggro decks a more appealing top-end option. 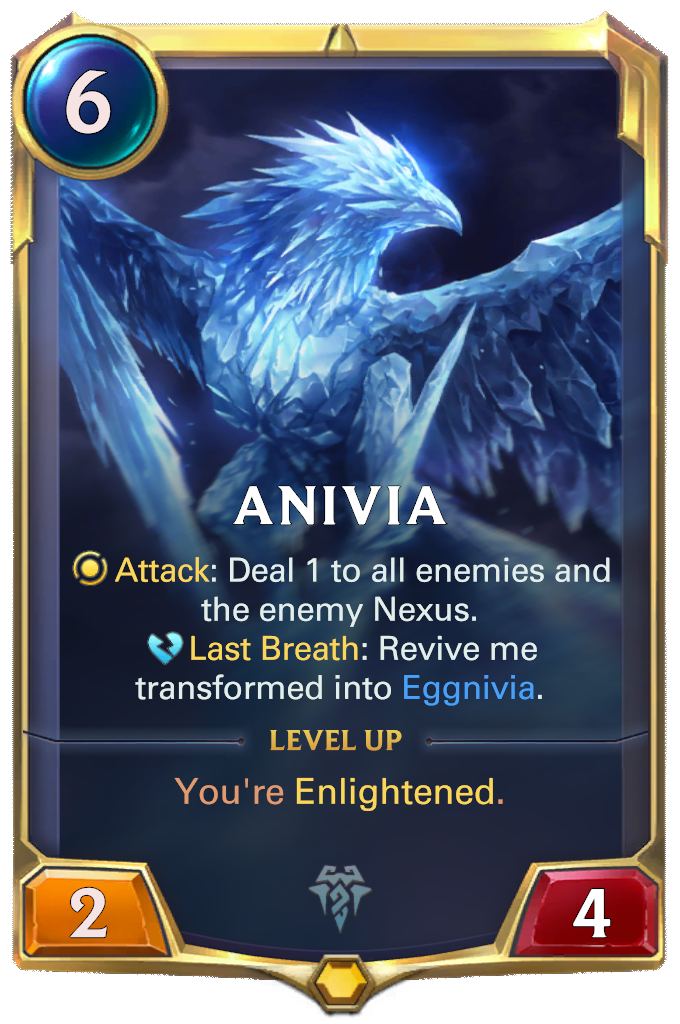 When compared to other similar champions like Nautilus (same cost) or Karma (same level-up condition), Anivia’s power level and kit weren’t quite matching up outside of very specific strategies. A cost adjustment should help her see more effective and widespread use. 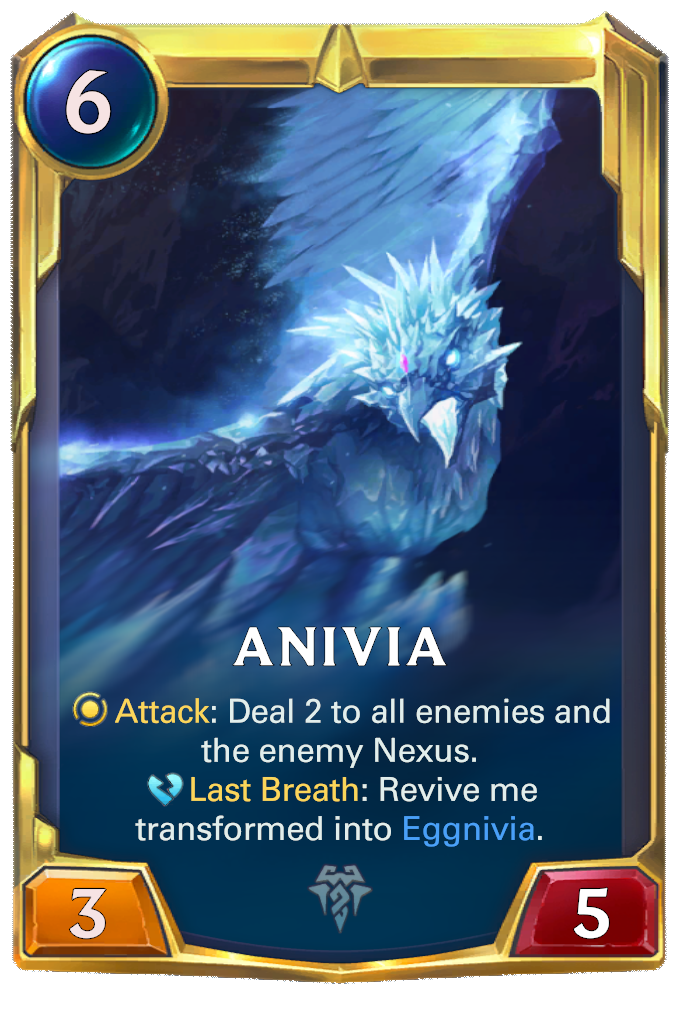 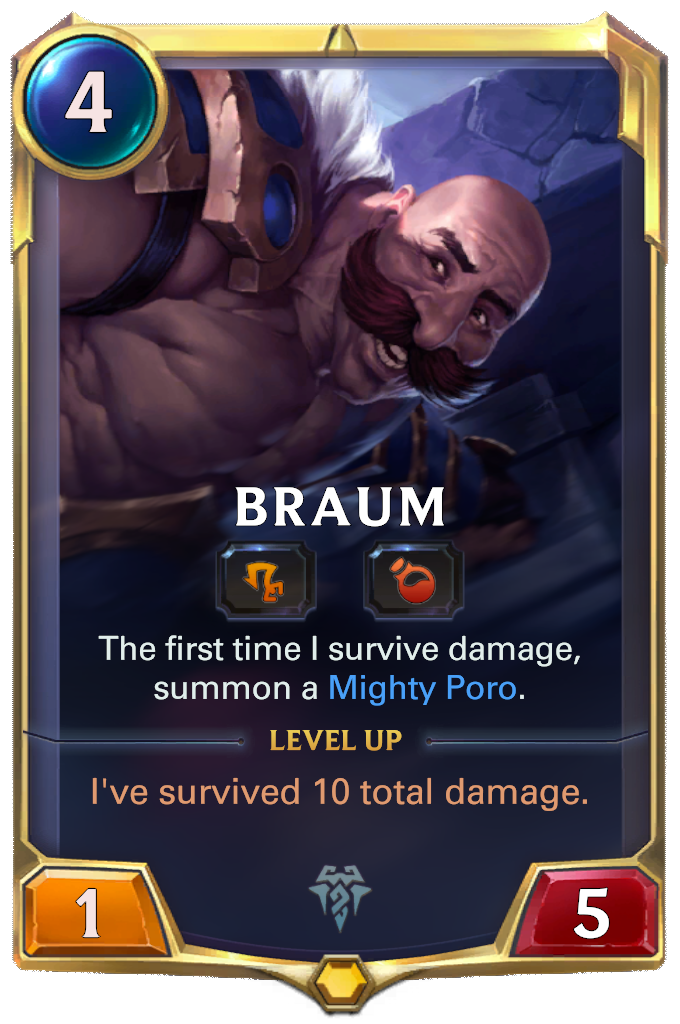 We’re looking to preserve what players liked about Braum’s old design while adjusting him to have healthier gameplay patterns that are also a better fit for more Freljord decks. While his cost has increased, his new baseline power and access to a Mighty Poro at level one should make him more widely usable. Similarly, adjusting his leveled-up stat boost to a more typical +1|+1 should improve his general power and ability to end games. 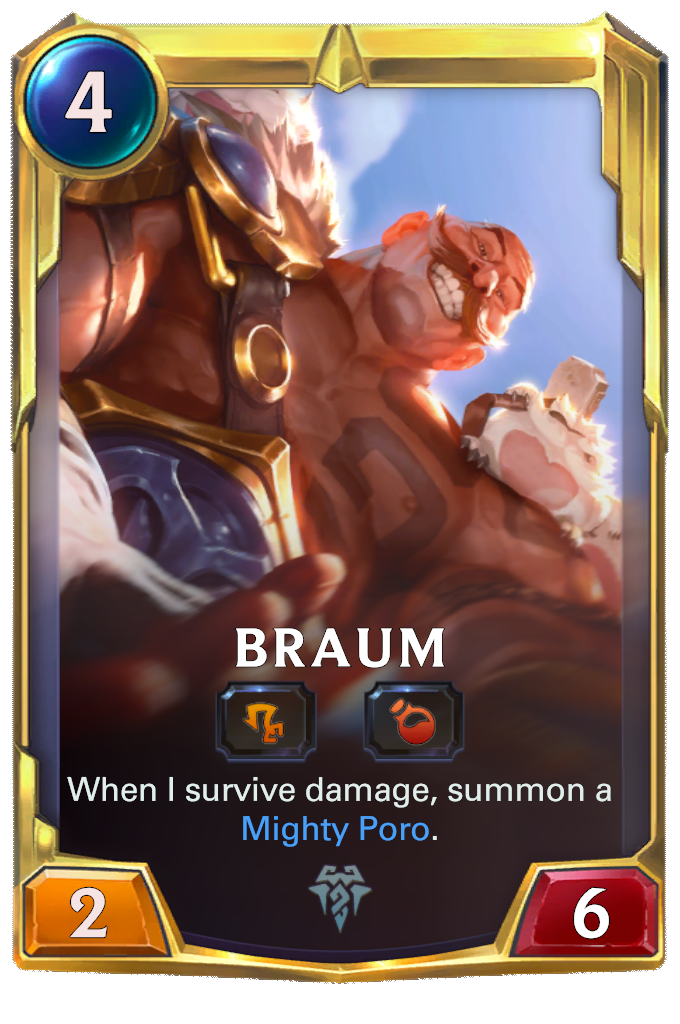 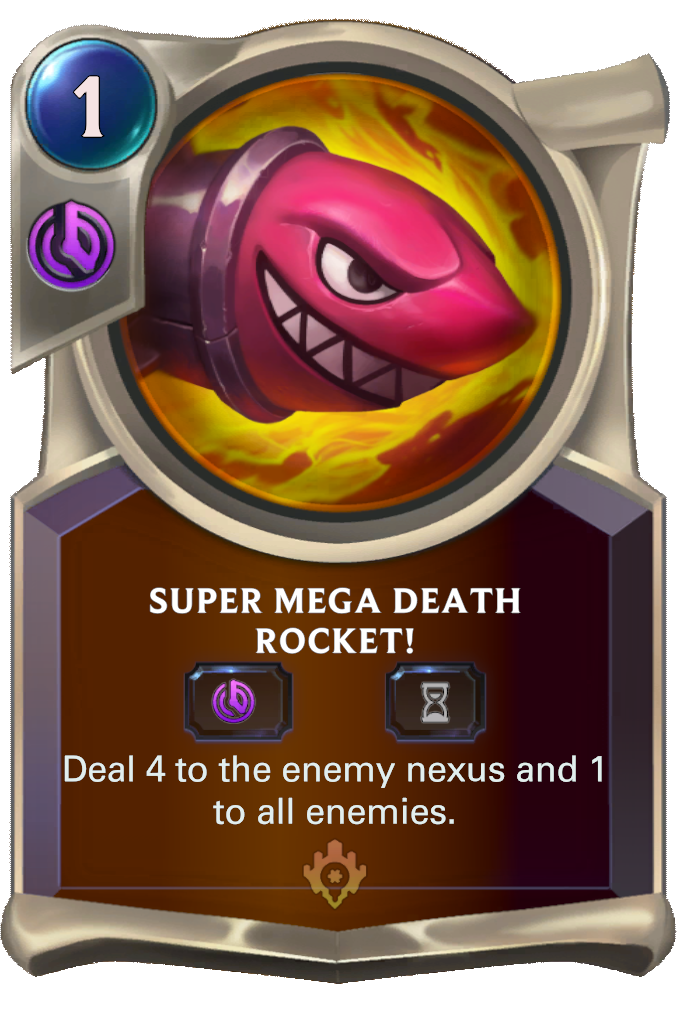 Jinx’s Rocket offers a satisfying payoff but could use a bit more consistency, especially in Expeditions. 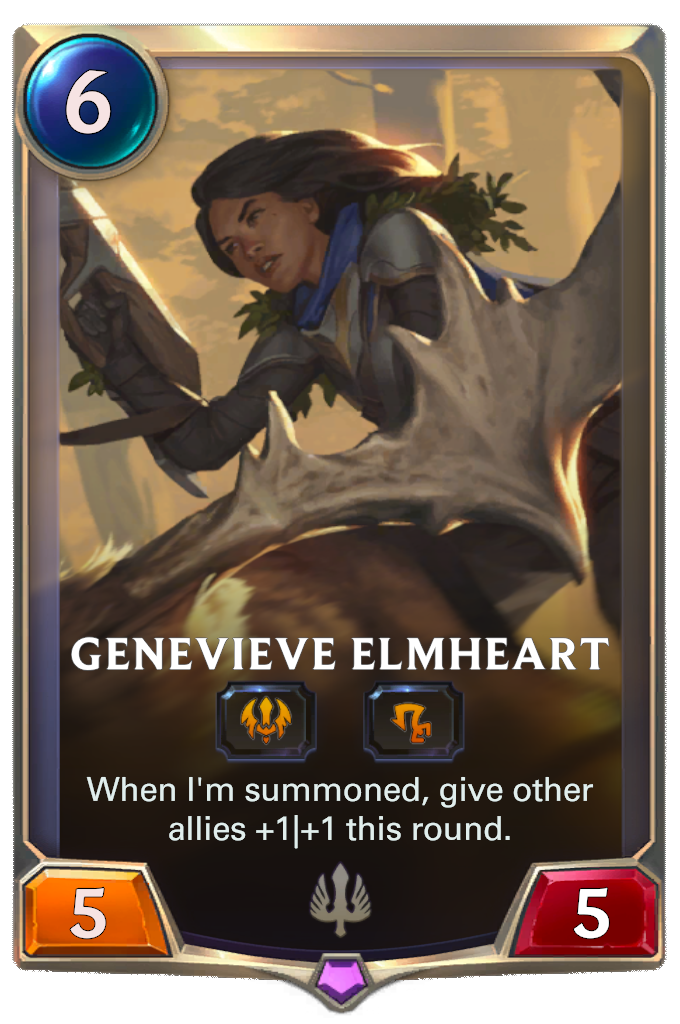 Genevieve has stiff competition at her cost and we’d like her to be a more generally appealing option, so she’s getting a straightforward stat boost to improve her impact. 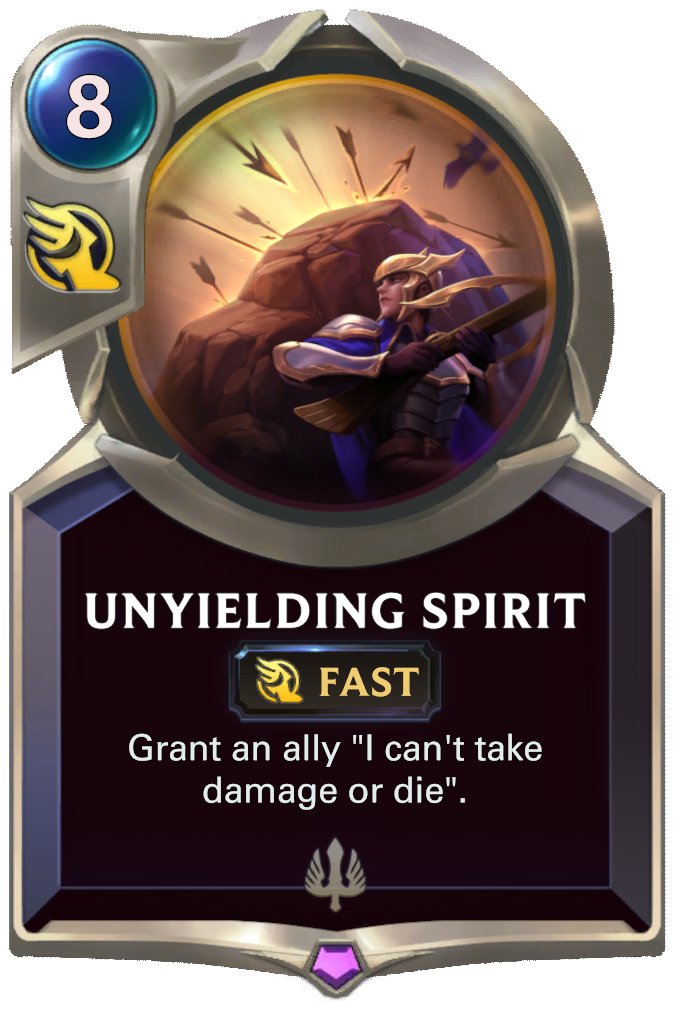 We like the idea of Unyielding Spirit’s dream (making an immortal unit), but it’s definitely been contentious and was ultimately resulting in some toxic gameplay patterns.

When it comes to new content, we typically want to allow players time to solve for metagame problems with existing tools—hell, we think it’s a big part of the fun of card games. In this case, that played a part in us not initially changing Unyielding Spirit, but we ultimately feel the card is too prone to causing frustrating results and needs additional options to be countered. 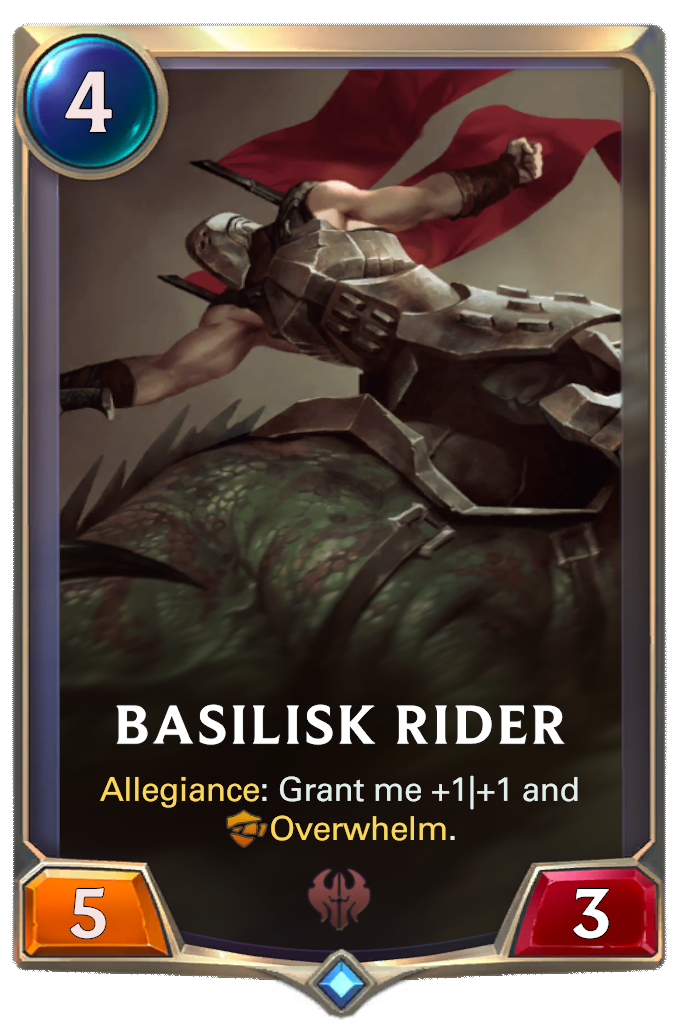 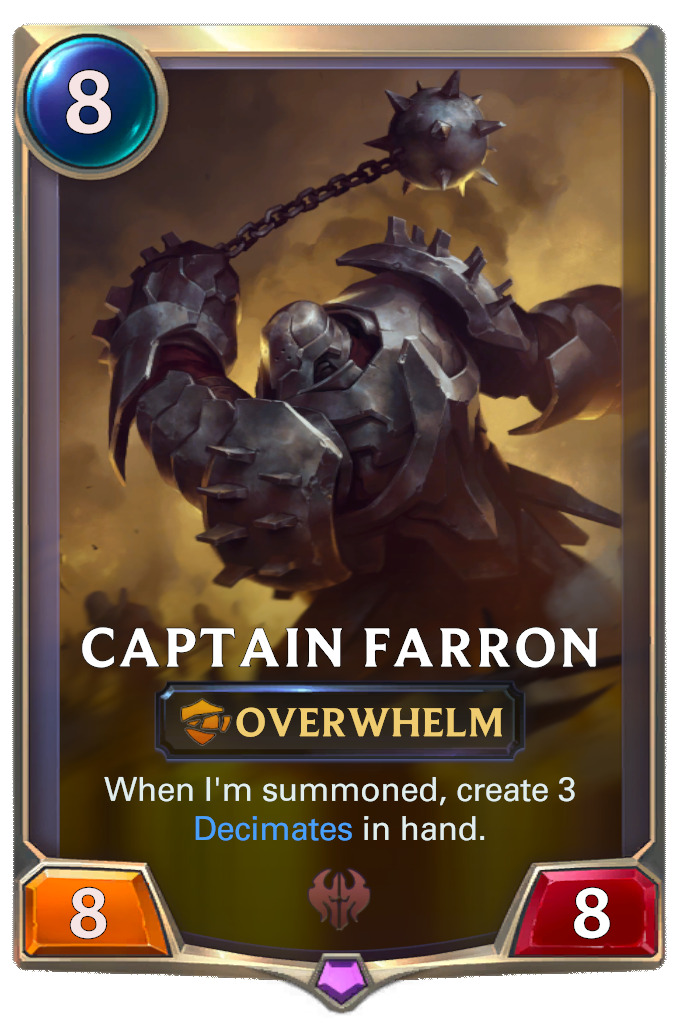 OLD TEXT: Play: Transform all cards in your hand into [Decimates].

Ol’ Captain Decimate is meant to be a late game finisher against slow decks, but discarding your hand (and requiring cards in hand to do anything) was a bit too high variance for that role, so we’ve adjusted his effect to simply create Decimates in hand. 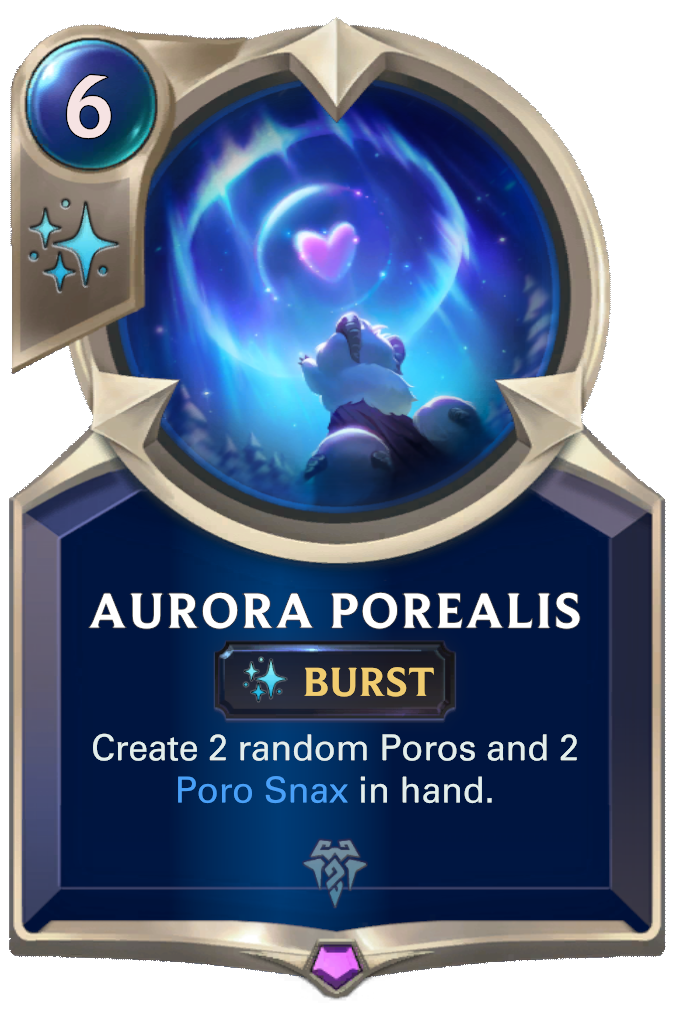 Aurora Porealis had too steep a cost for no immediate impact, so we’re moving it down in cost to allow it to be used without falling so far behind. 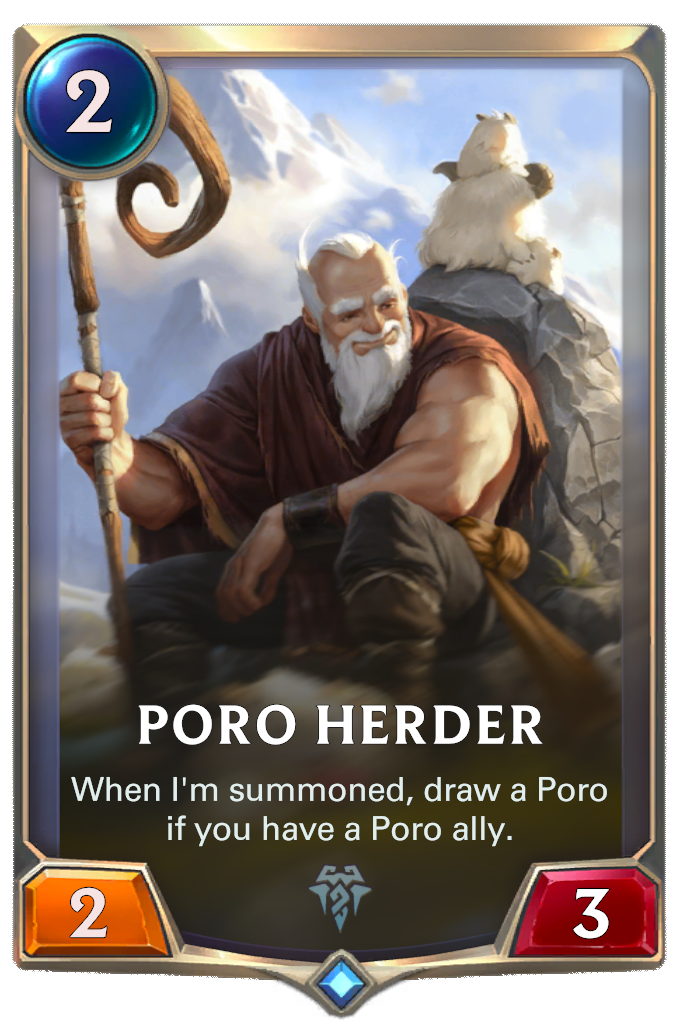 OLD TEXT: When I’m summoned, draw 2 Poros if you have a Poro ally.

NEW TEXT: When I’m summoned, draw a Poro if you have a Poro ally. 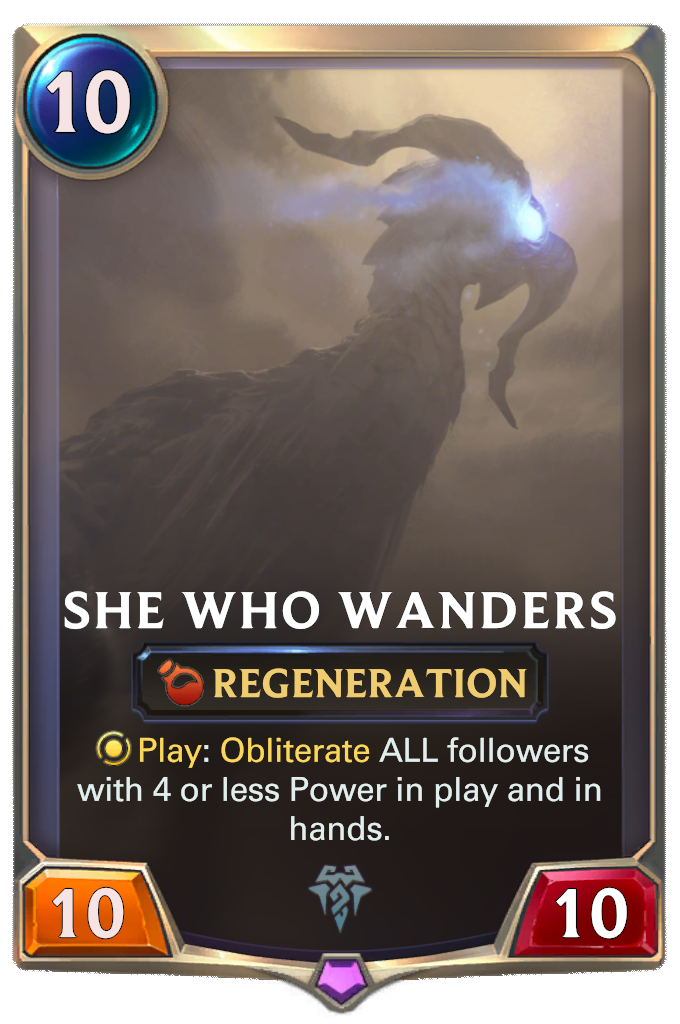 One of the OG bombs in LoR back during beta, She Who Wanders has seen better days. We think she could use a boost when it comes to being a huge, gameshaking bomb for niche decks, so we’re adding Regeneration to help her close out games. 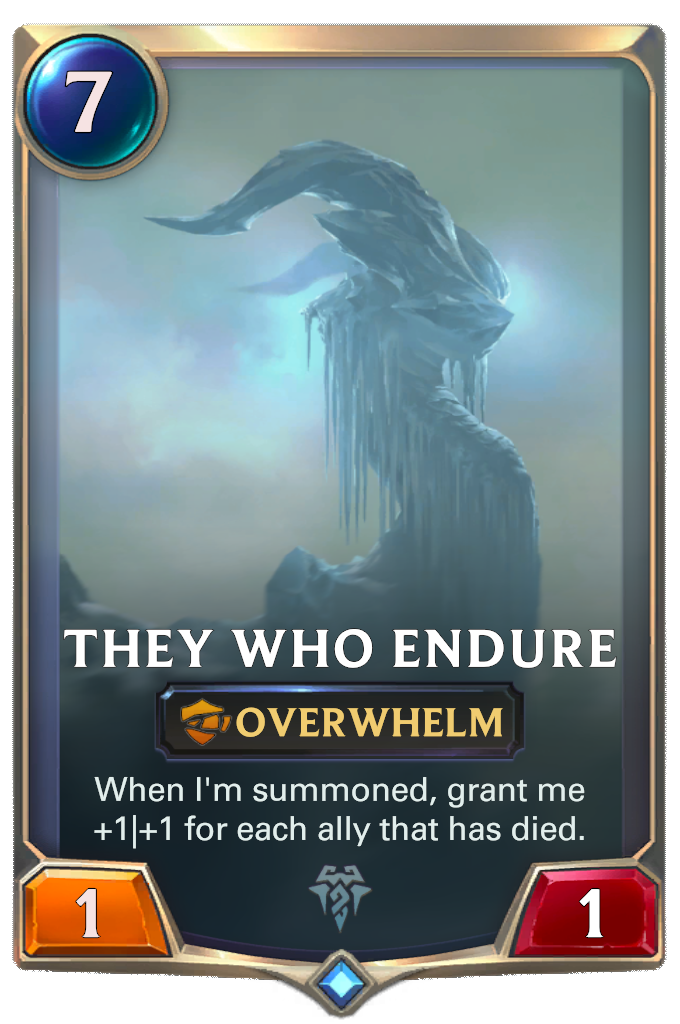 They Who Endure provides a massive payoff for decks that can kill many of their own units, but is a little too efficient and flexible. With this change, we want to preserve that payoff while allowing more time for opposing plans to develop. 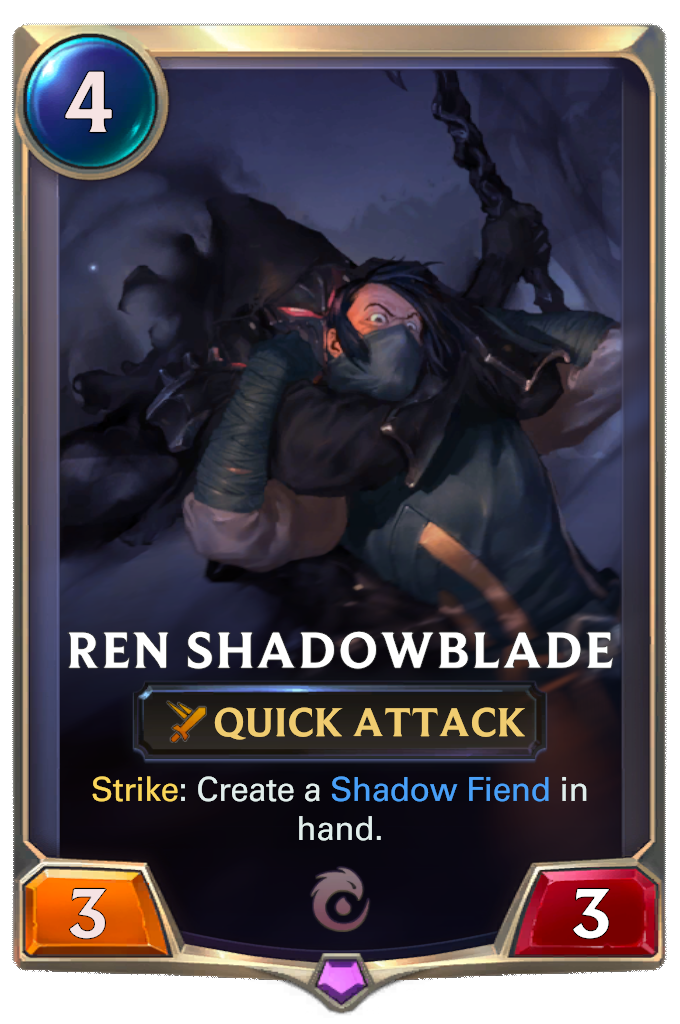 OLD TEXT: When the enemy summons a follower, grant it Ephemeral.

The strength of Ren’s old effect warranted a sizable mana cost, which left the card tough to build around (and often not fun to play against). We’ve fully redesigned it with the goal of giving Ephemeral decks more options for units that can be played to set up future plays. 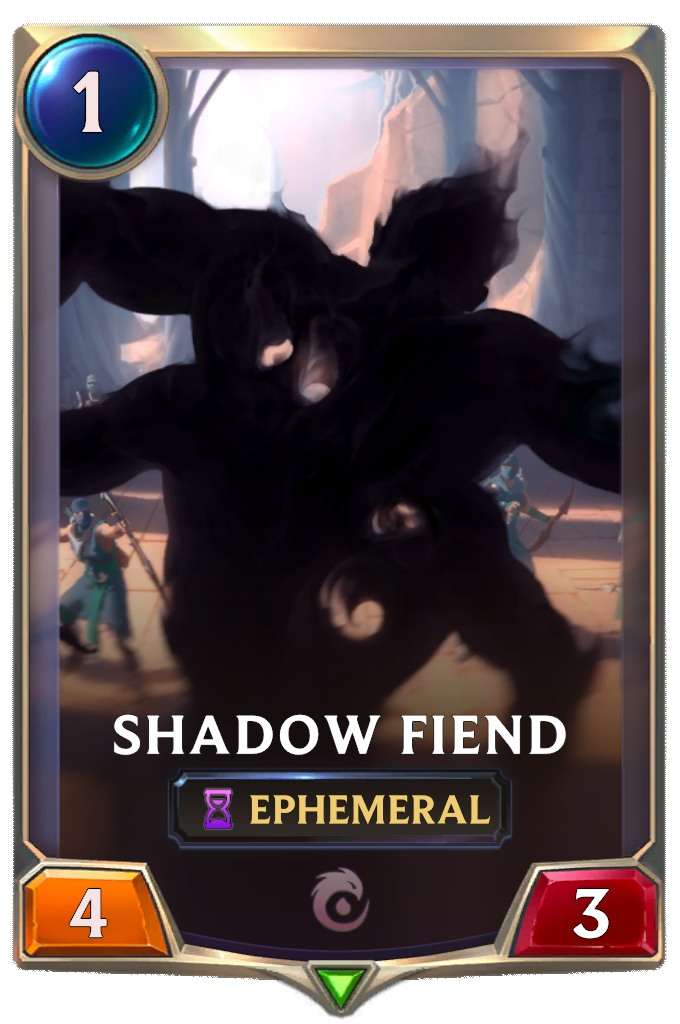 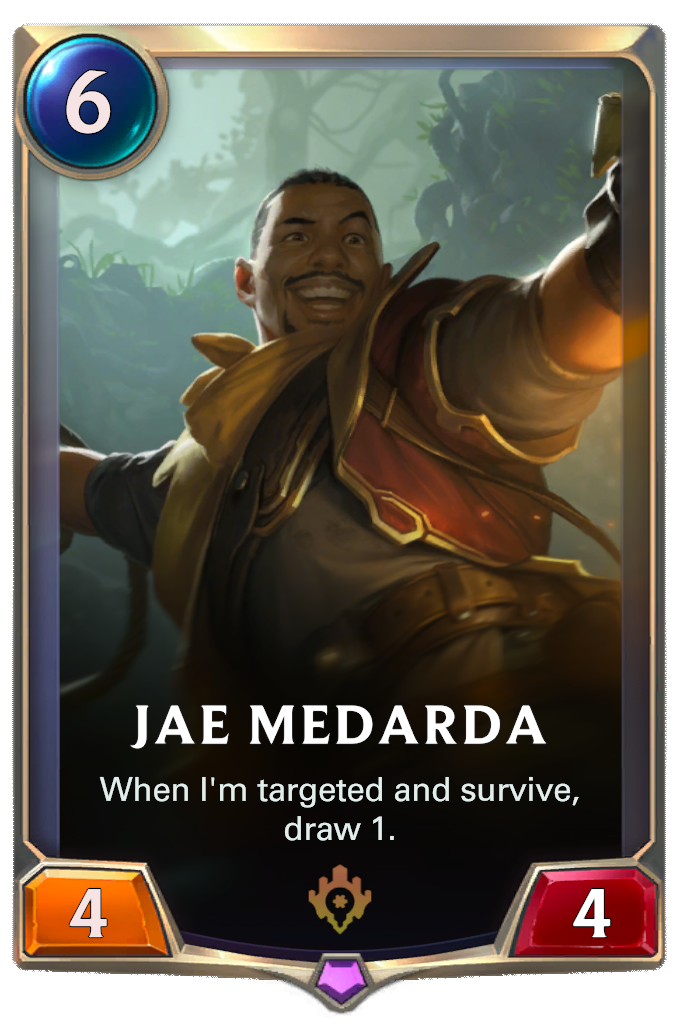 Jae’s line of text is really exciting as a build-around possibility, but his cost and stat profile often made it feel like a trap to do so. We’re adjusting him across the board with the goal of making the dream (or parts of it) more consistently attainable. 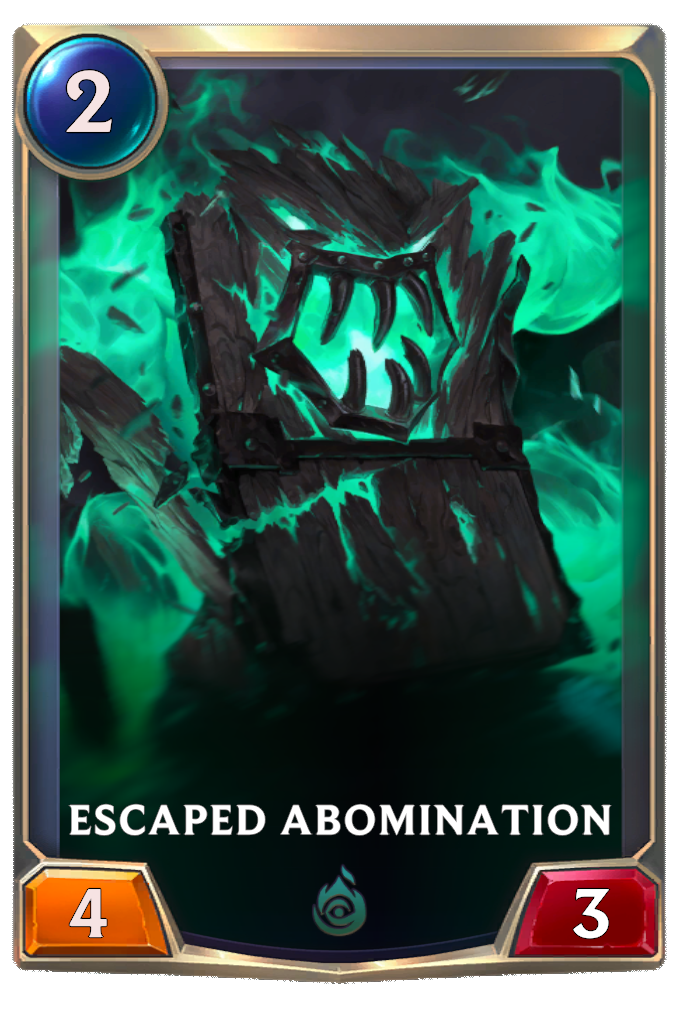 It can be extremely difficult to come back against aggressive Shadow Isles decks if they get off to a quick start and you fall behind early. We want Escaped Abomination to be a bit more answerable in the early game, especially in the context of Cursed Keeper + Blighted Caretaker curves that create a large board advantage while contributing to synergies. 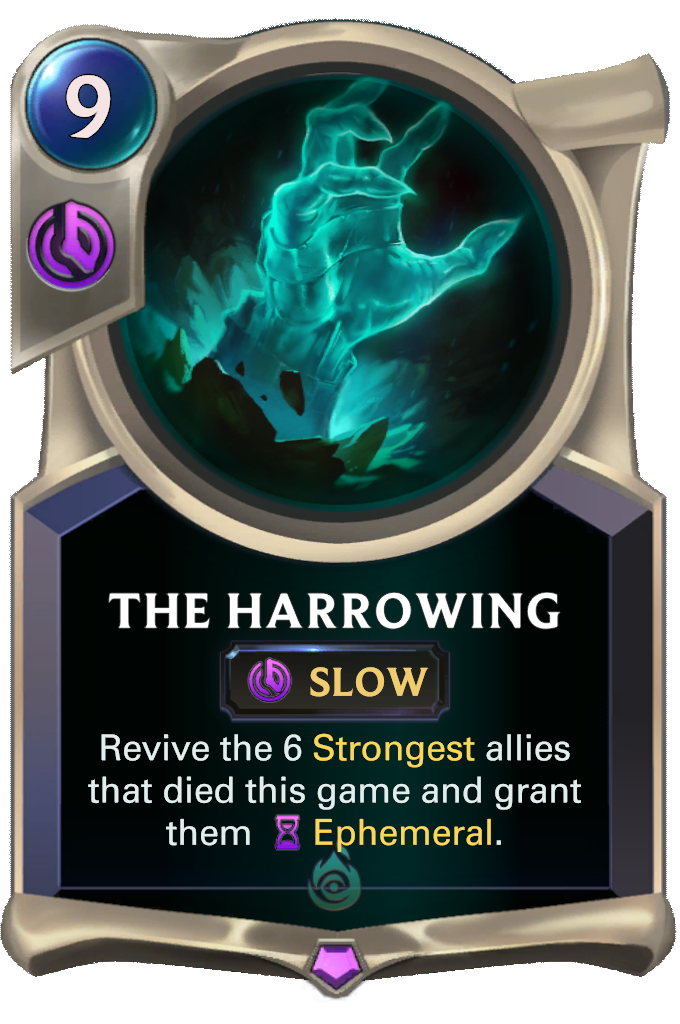 The Harrowing is meant to be a splashy finisher for Shadow Isles decks, but it’s struggled to find a home. We’re dropping its cost by one to help out more synergy-driven Shadow Isles strategies.

Deep decks have generally been in a good spot, but their tools for creating early game presence have been stronger than we want for a deck that can sink you in the late game. This adjustment should make sure Deep decks are playing from behind a bit more often. 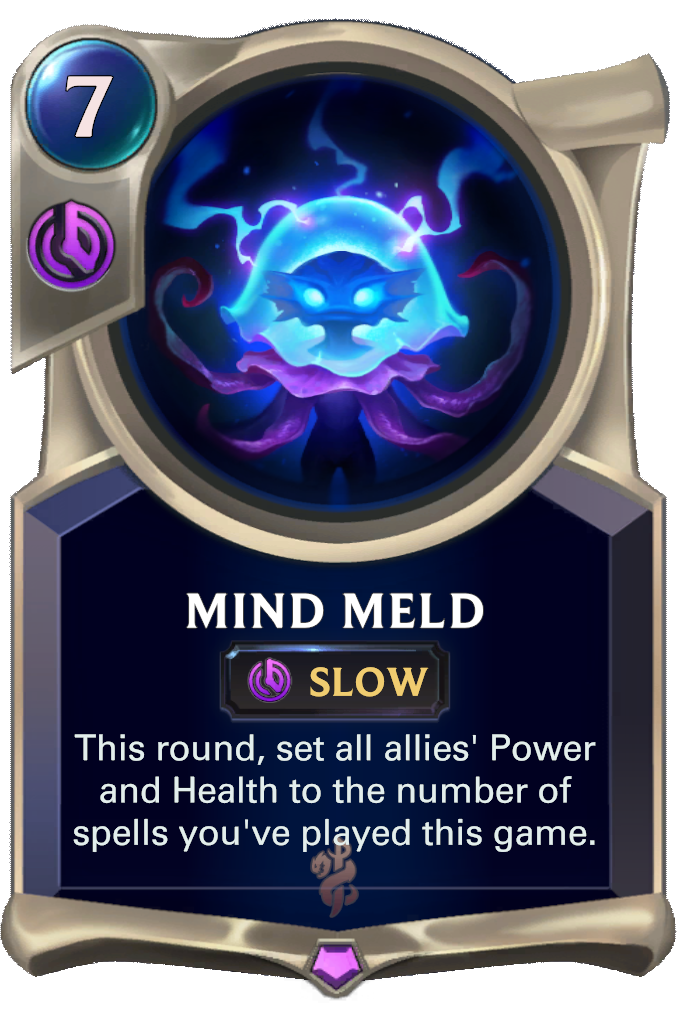 Mind Meld was simply too costly for its effect. 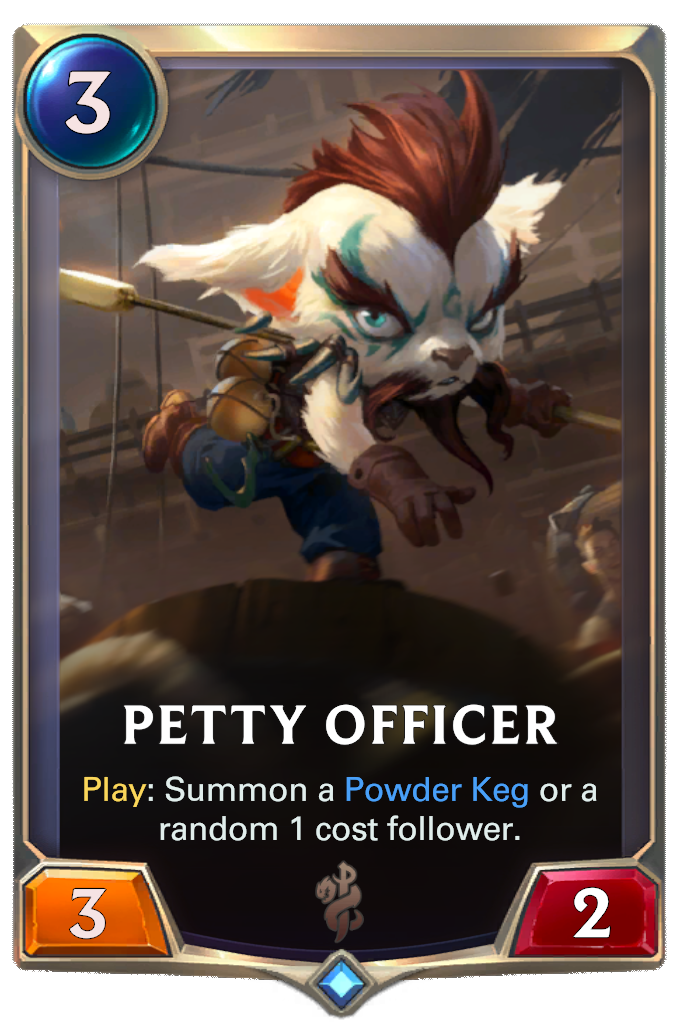 We want to both give a boost to Barrel decks and provide a more effective option for aggressive Bilgewater decks—this buff should help push Petty Officer towards its intended role as a versatile option that allows more decks access to Barrels.

Drawing from the enemy deck has been a contentious mechanic in Rising Tides, and we’re making a change to address some of the frustrations players have experienced. First, let’s call the effect by its new keyworded name—Nab—which has the important difference (versus prior functionality) of drawing from the bottom of the enemy deck rather than the top.

Previously, these effects caused unintentionally sharp match-ups with any deck looking to manipulate the top of their deck (particularly Freljord deck buff strategies). We also understand that it can feel particularly frustrating to have the card you were about to draw used against you, regardless of there being no general statistical difference in drawing from the bottom.

As a minor note, this change will also prevent Nab effects from filtering your opponent closer to drawing their Champions—while this could be an interesting tradeoff, it wasn’t an explicit design goal for the mechanic and we think it’s worth losing in the name of overall improvement.

We’ll be keeping a close eye on the impact of these changes, and are open to making further adjustments as necessary. 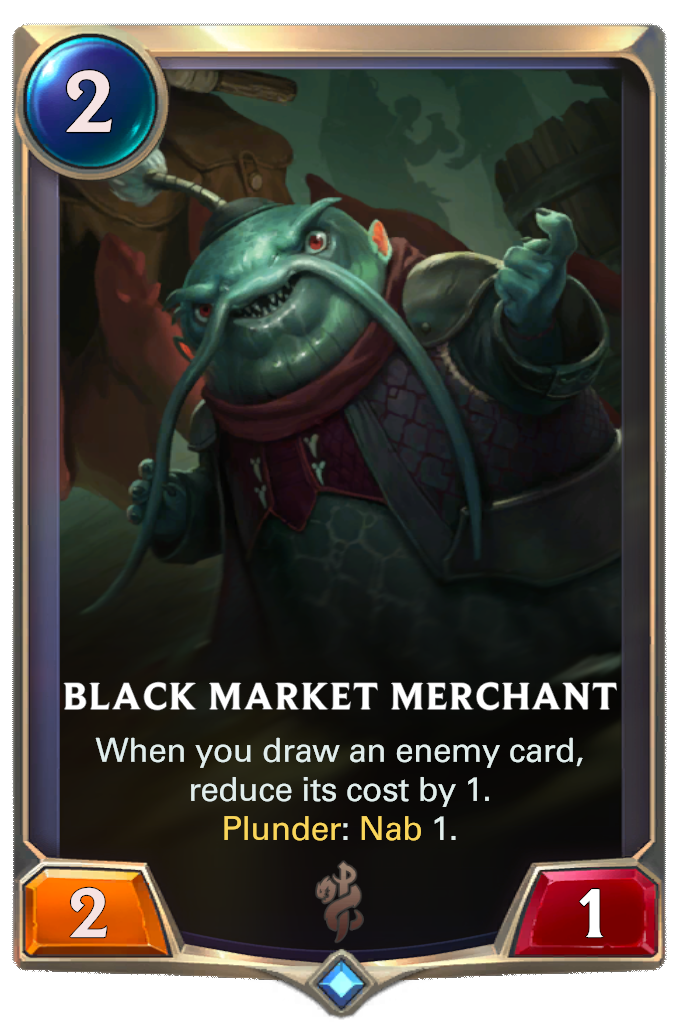 We want to preserve the Merchant’s role as a lynchpin of Nab decks while making it easier for opponents to remove, and harder for players to protect and build up multiple copies in the backline. 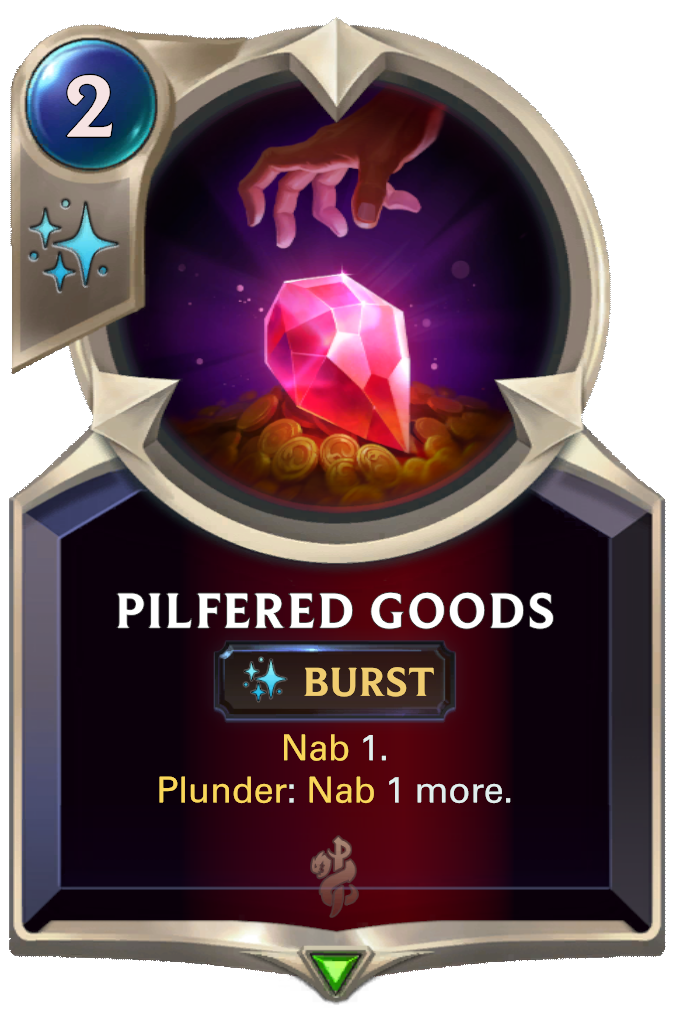 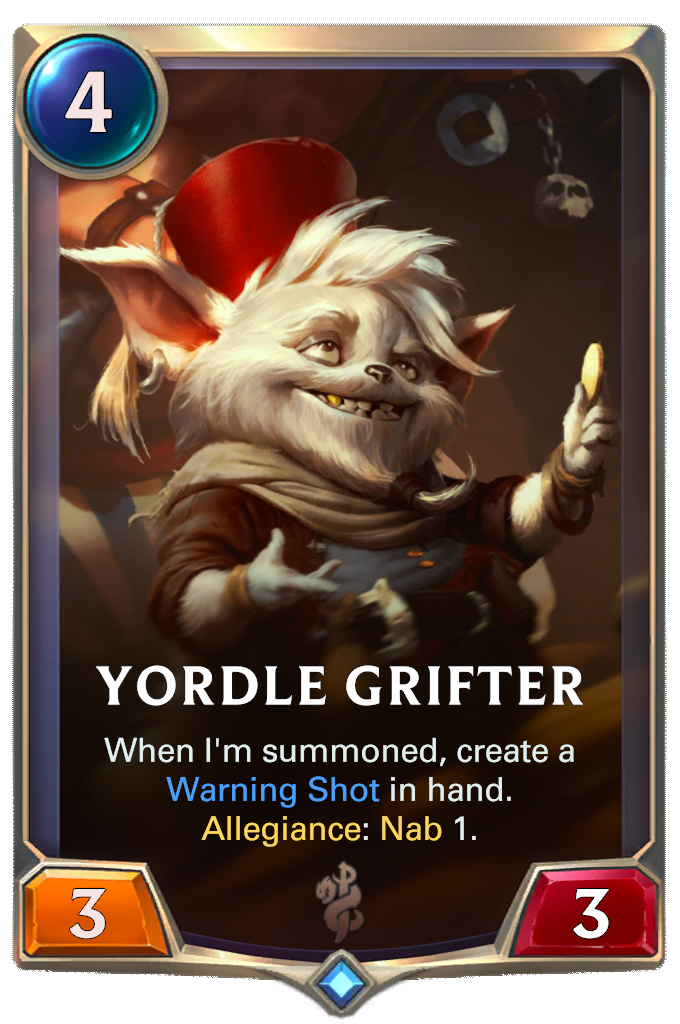