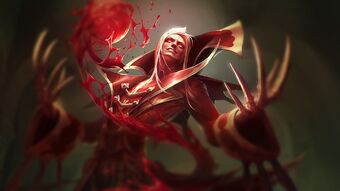 Patch 1.2 features our first balance changes since the debut of Rising Tides, as well as a bunch of card clarity updates. 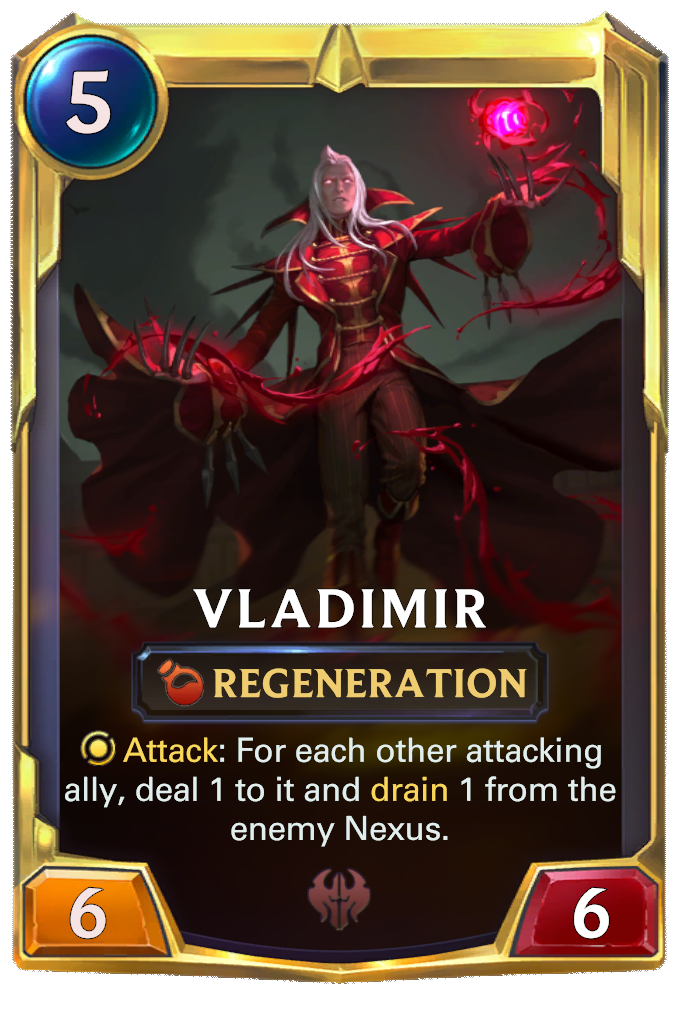 While this patch is focused on numbers changes, Vladimir has been falling short of the play rate, gameplay satisfaction, and champion resonance levels we strive for in our champs, so we’re making a more complex change by making Vlad’s level 2 effect a drain. In addition to making Vlad feel even more like a life-draining battle mage, this change should provide Vlad decks with additional utility and a more exciting and impactful payoff for his level-up requirement. 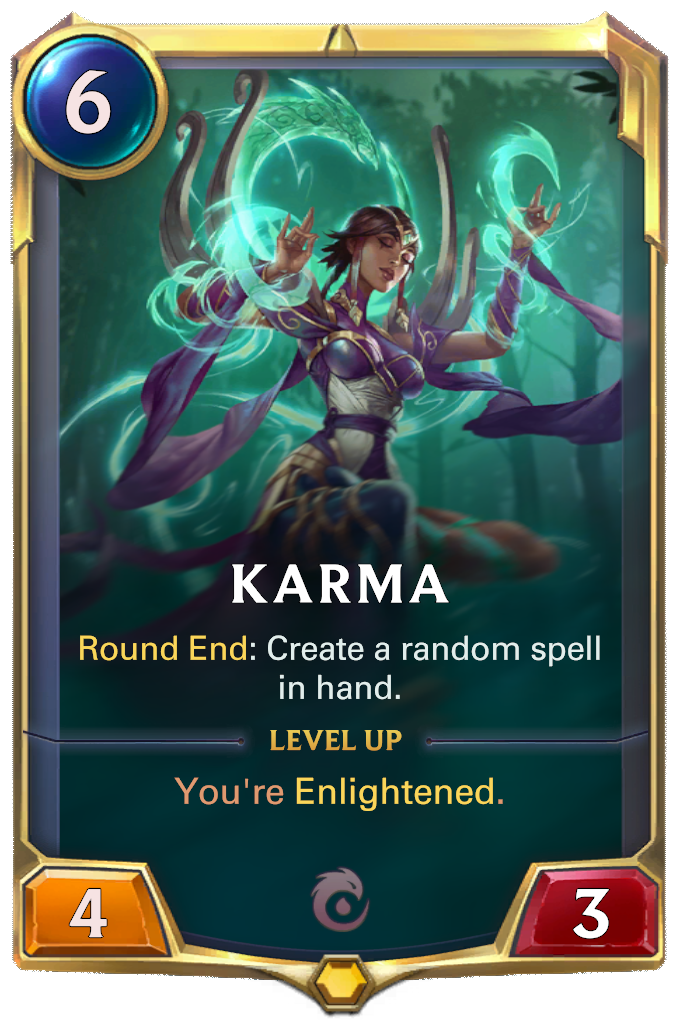 We want Karma to be both more difficult to protect and more taxing on your immediately available mana, so we’re bumping her cost to put more constraints on what else players can do on the turn they play Karma. 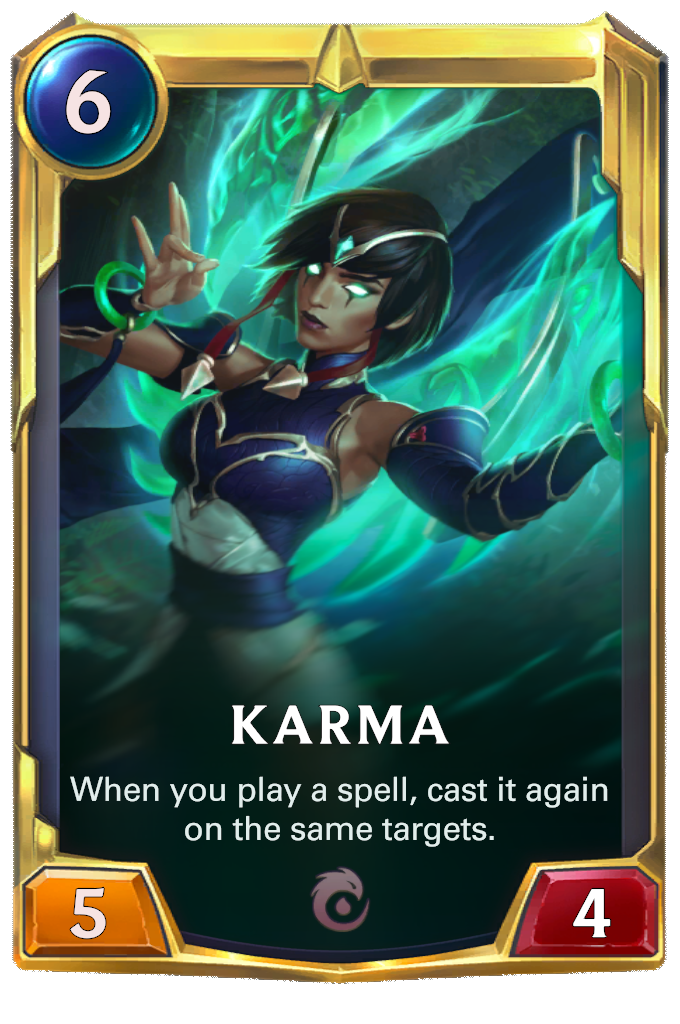 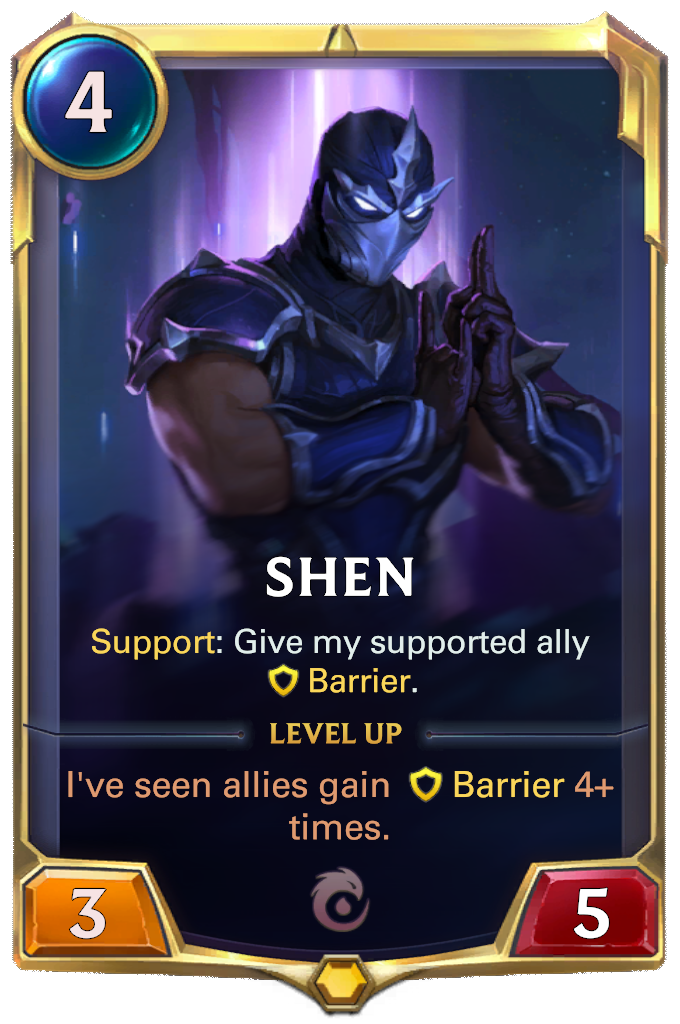 Shen has been among the least-played champions for some time, especially as he tends to require including Demacia in your deck to really shine. For now, we’re boosting his power to make him more of a threat on his own and easier to plan profitable attacks around. 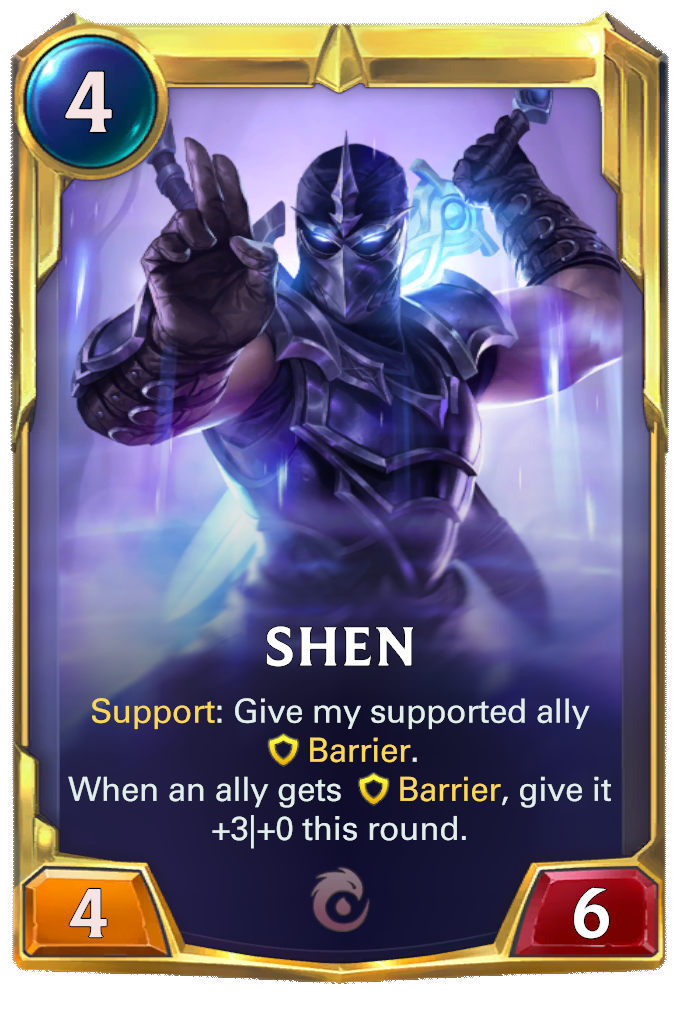 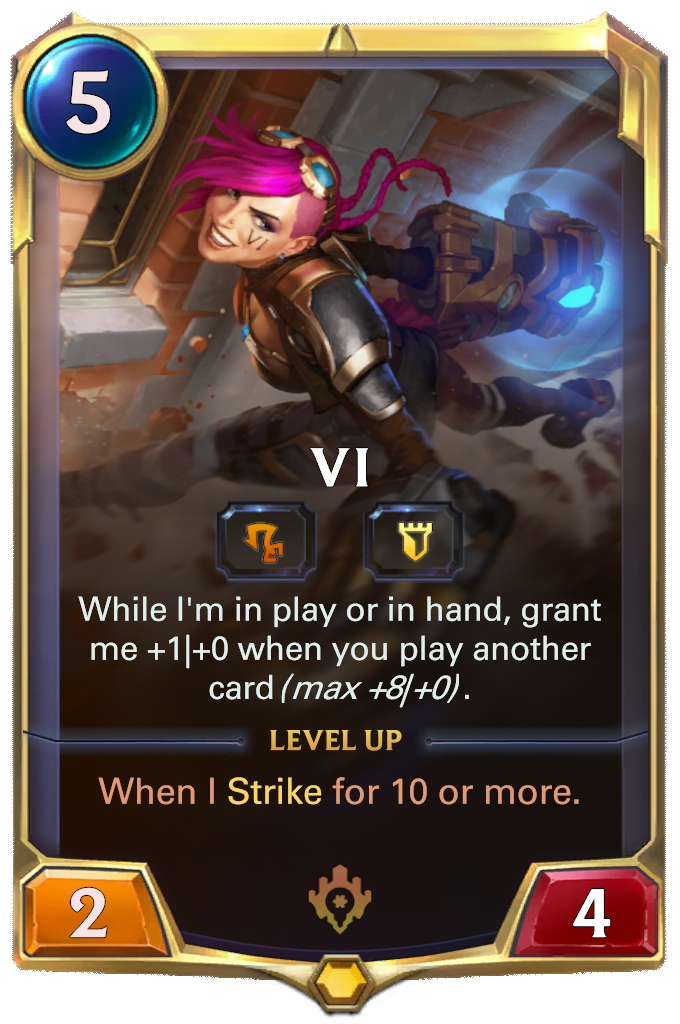 While Vi doesn’t offer a particularly game-warping effect like some Champions, she’s overperforming in multiple decks due to the raw strength of her baseline stats. We want to adjust her to be less of a generalist, best-in-slot champion for Piltover & Zaun, while retaining most of her power in decks that synergize with her kit. 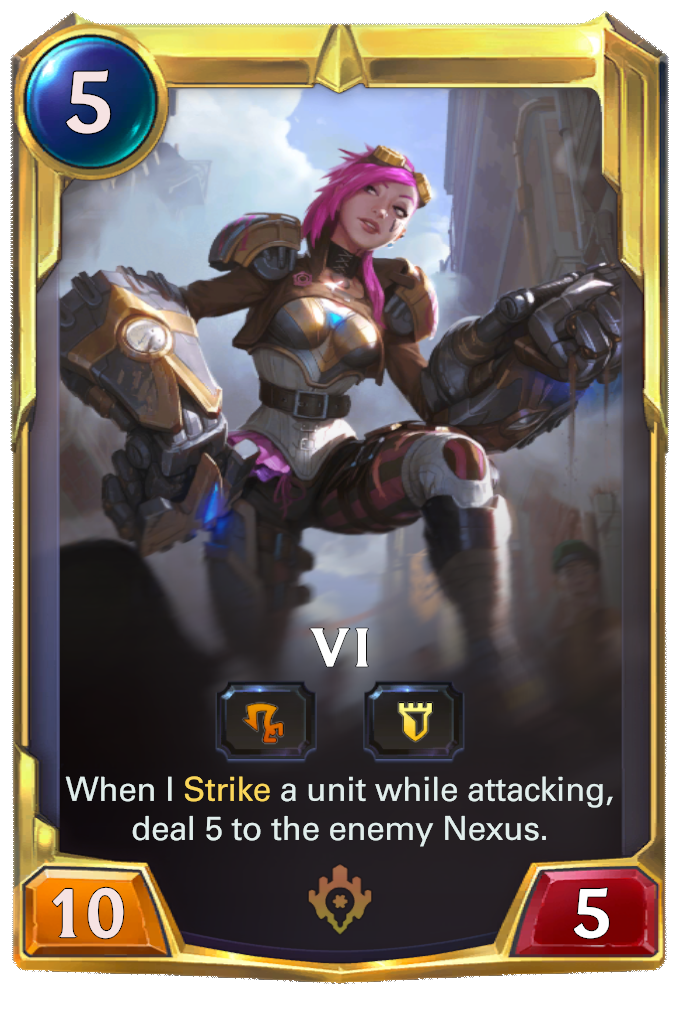 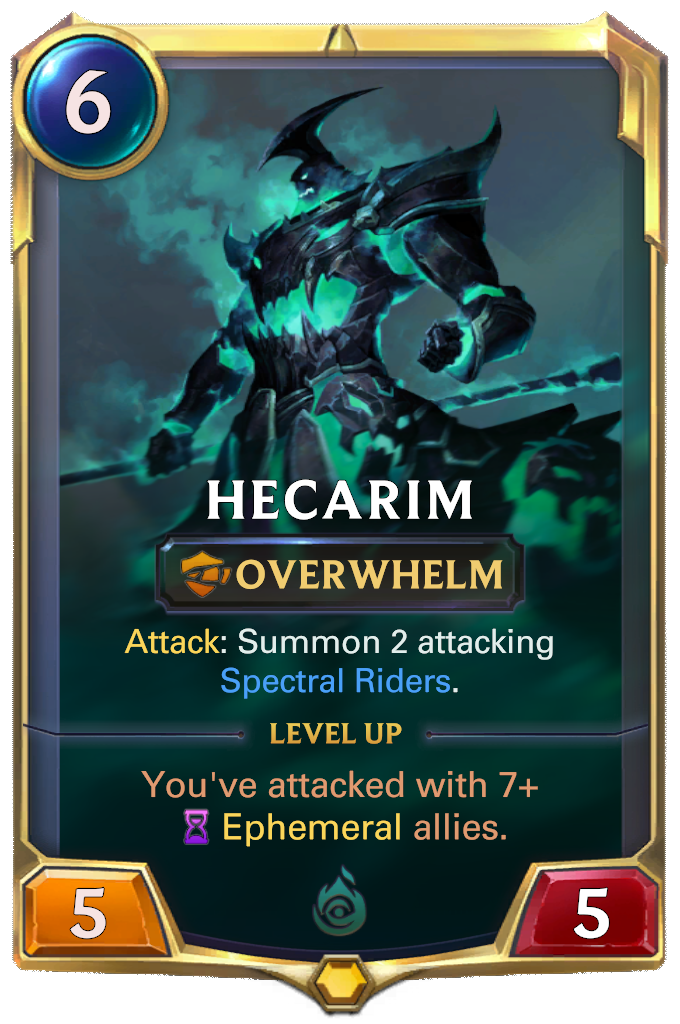 Hecarim’s statline sometimes made it a bit too difficult to find profitable attacks, so we’re bumping his power to help him attack into more board states and improve his gameplay satisfaction and overall effectiveness. 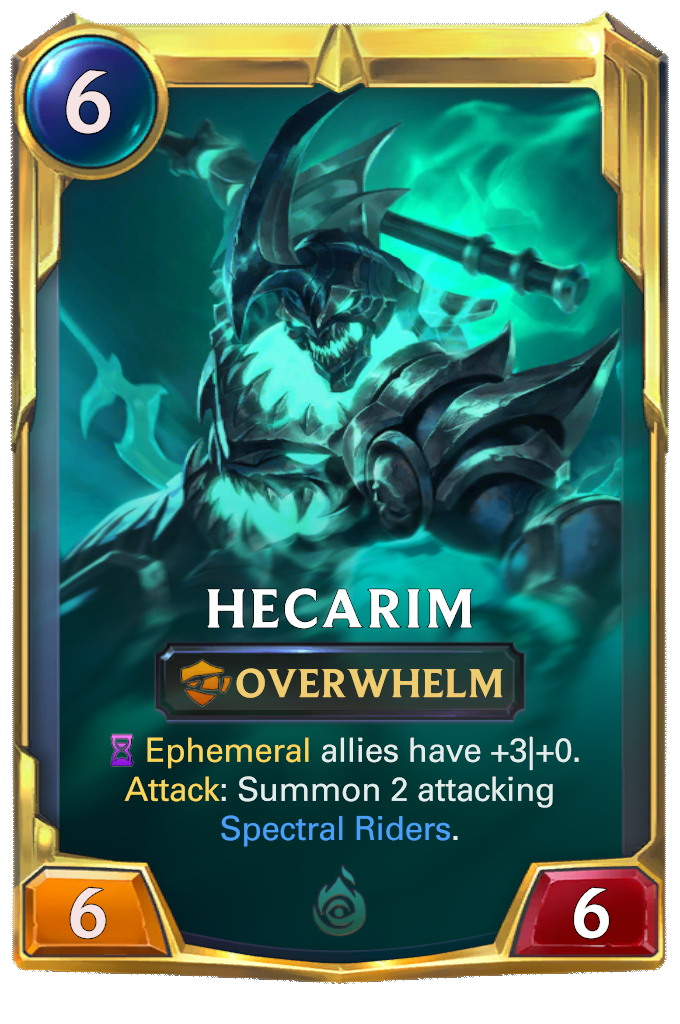 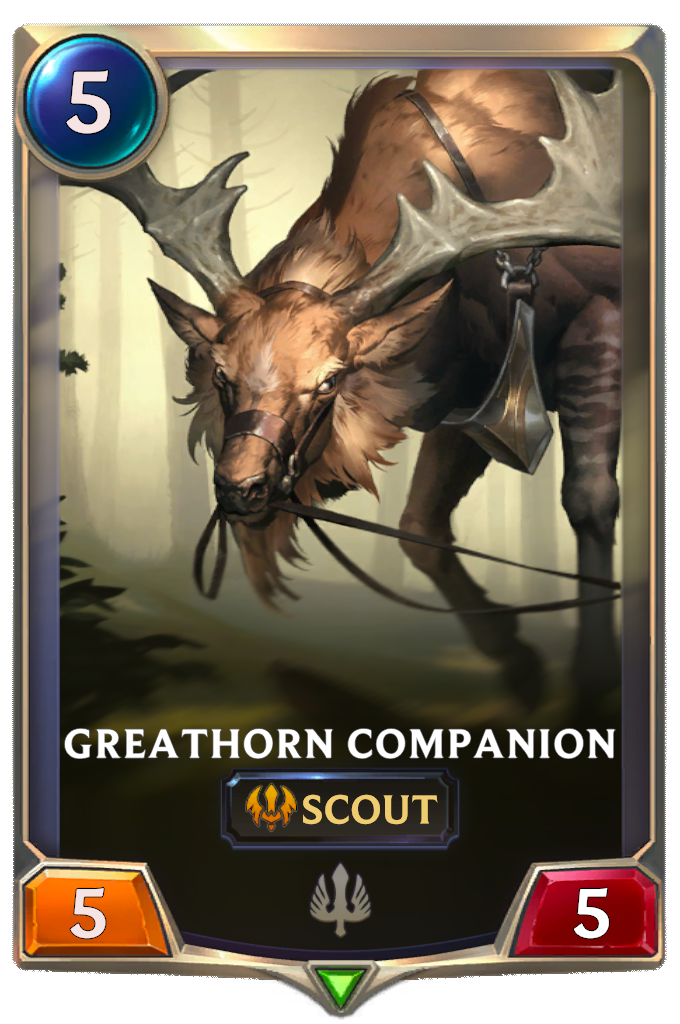 We want to move some of Grizzled Ranger’s former power (see below) up the curve, giving dedicated Scout decks more viable options. Of course, this is also a slight buff to Remembrance when it pulls you a Greathorn. 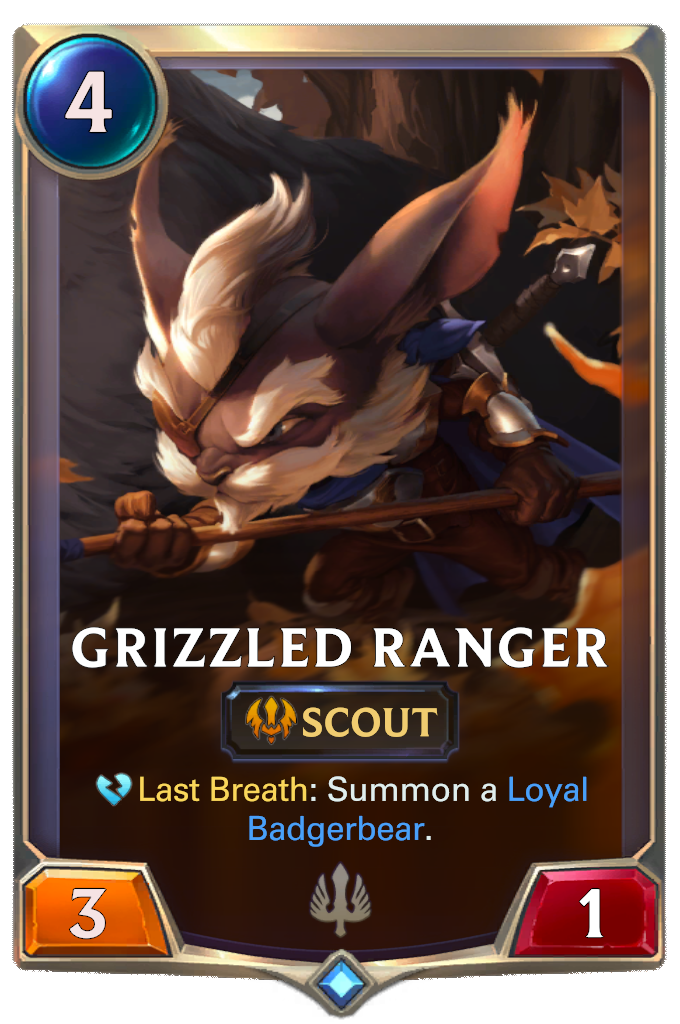 Grizzled Ranger is among the most value-heavy followers in the game. Not only is it resilient, but Scout allows the Ranger to push a ton of damage, force opponents to make suboptimal trades, and ultimately allow Demacia players a mid-game advantage that’s been feeling a bit too “free.” We’re reducing Ranger’s power (and Loyal Badgerbear’s) to allow players more flexibility and counterplay in deciding when and how to block him. 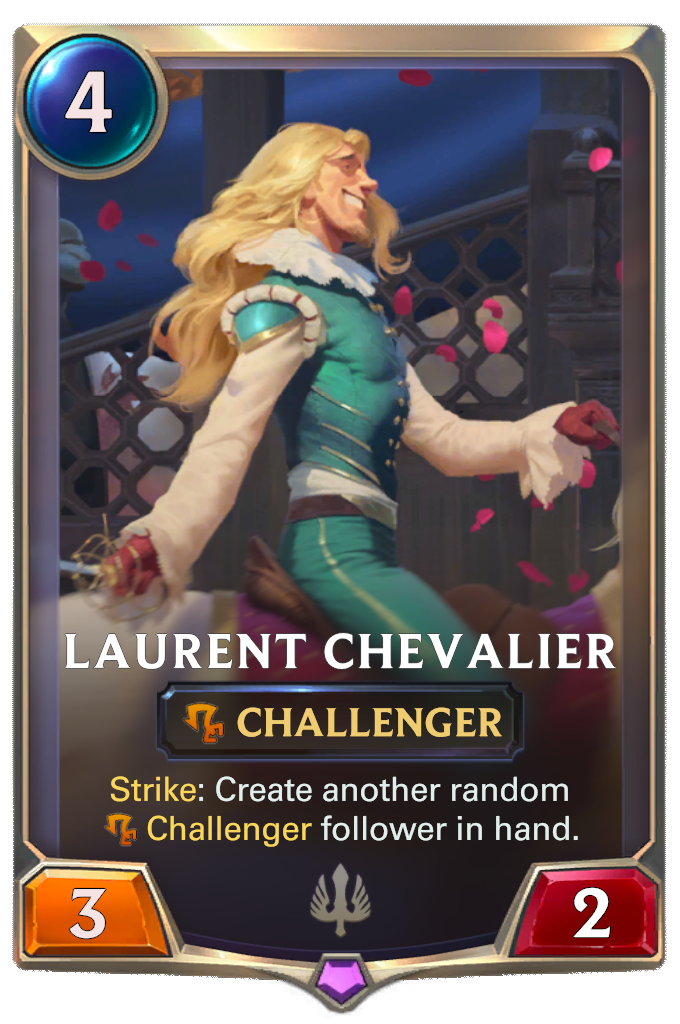 Laurent Chevalier was a bit too fragile for its cost to realistically chase the dream of multiple triggers. It deserves a boost on its own, and we’ve got a good opportunity given that Demacia is seeing a few nerfs in this patch. 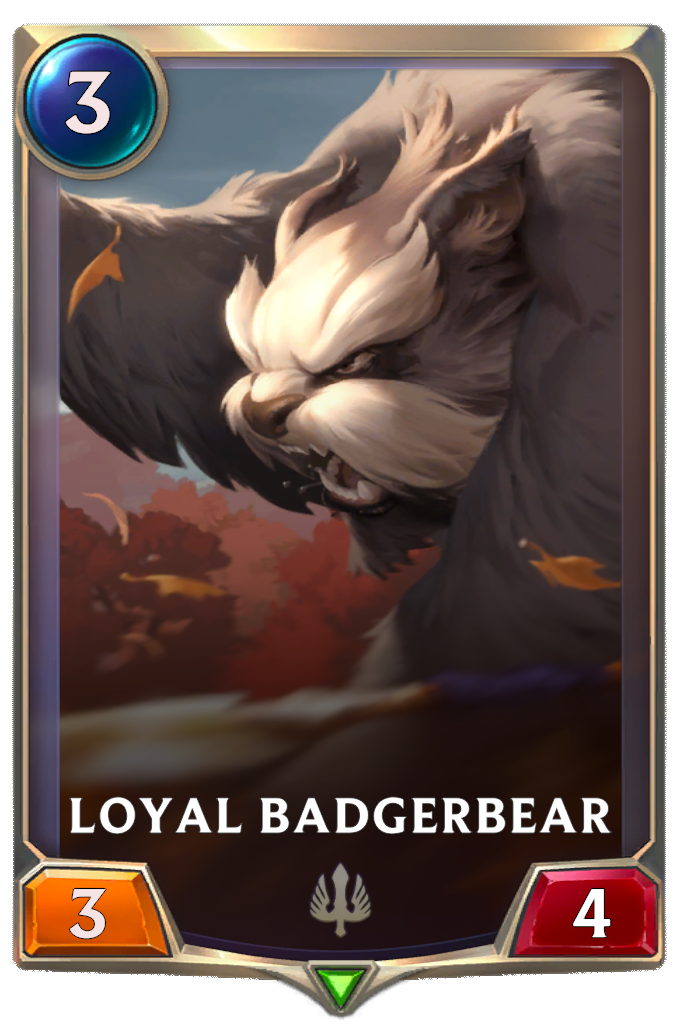 This change overlaps with the one to Grizzled Ranger, though Badgerbear has proven problematic on its own, particularly in Expeditions where it was pushing Demacia’s general strength in raw stats a bit too far. 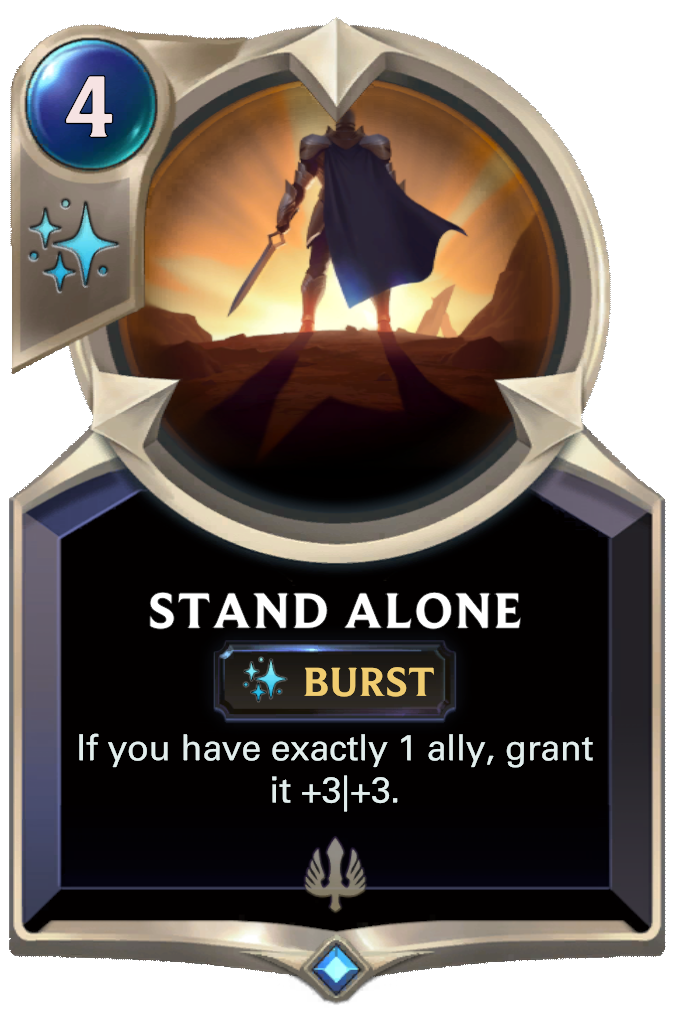 Stand Alone can lead to undesirable gameplay patterns, particularly when one player goes all-in on one unit as early as round three, leading to deterministic games that undermine decision-making and turn too sharply on whether the opponent has the answer (or is even playing the right region). We’re pushing Stand Alone’s early game potential back with a cost increase that cuts off the ability to attack on round three with a three cost unit + Stand Alone combo. 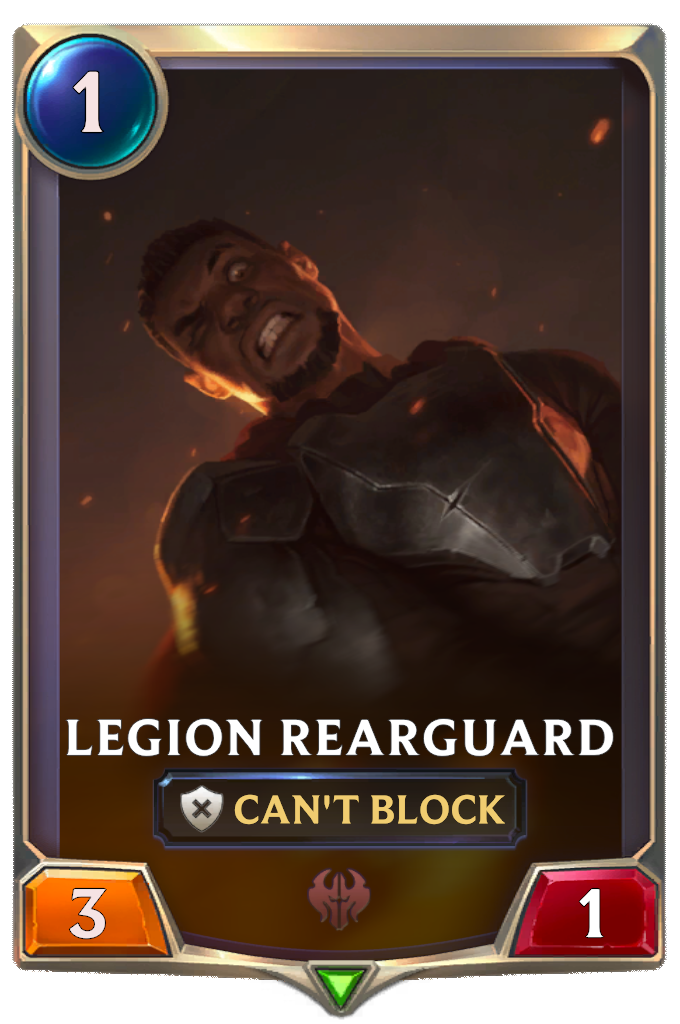 Rising Tides has introduced much more direct Nexus damage into LoR (more commentary in the watchlist below), and we’re seeing a bit too much consistency in the most powerful variants of burn / aggro decks, particularly in their favored matchups. We’re making targeted adjustments to Legion Rearguard and Boomcrew Rookie (below) to rein in some of these decks’ early snowball power.

When looking at the data for burn / aggro decks utilizing Legion Rearguard, we saw that a round one Rearguard often gave decks a significant boost in win rate compared to other cards when played on curve. In the right decks (or against them), Rearguard provides too much punishment potential for a simple one drop, and we don’t want players to feel so consistently and immediately behind (or that they’ve already lost) for lack of a suitable round one answer. This adjustment also evens out counterplay to Rearguard among the various regions. 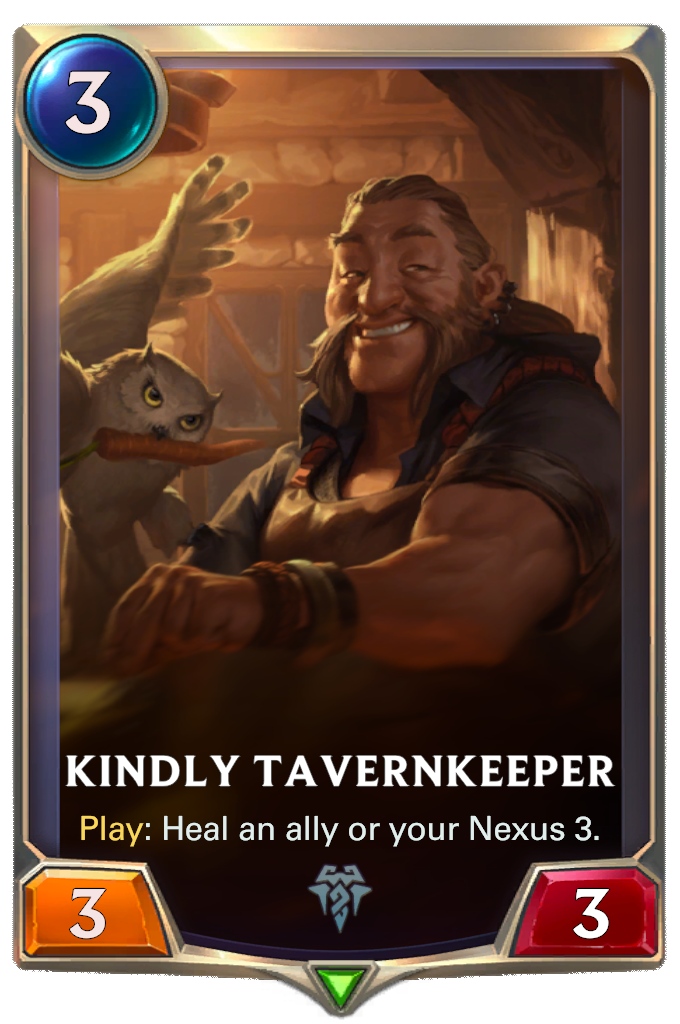 Healing is part of Freljord’s regional identity, but hasn’t been as available to non-ramp decks as we’d like. A general usability boost for Tavernkeeper should make it appealing as a flex slot for a wider range of Freljord Decks. 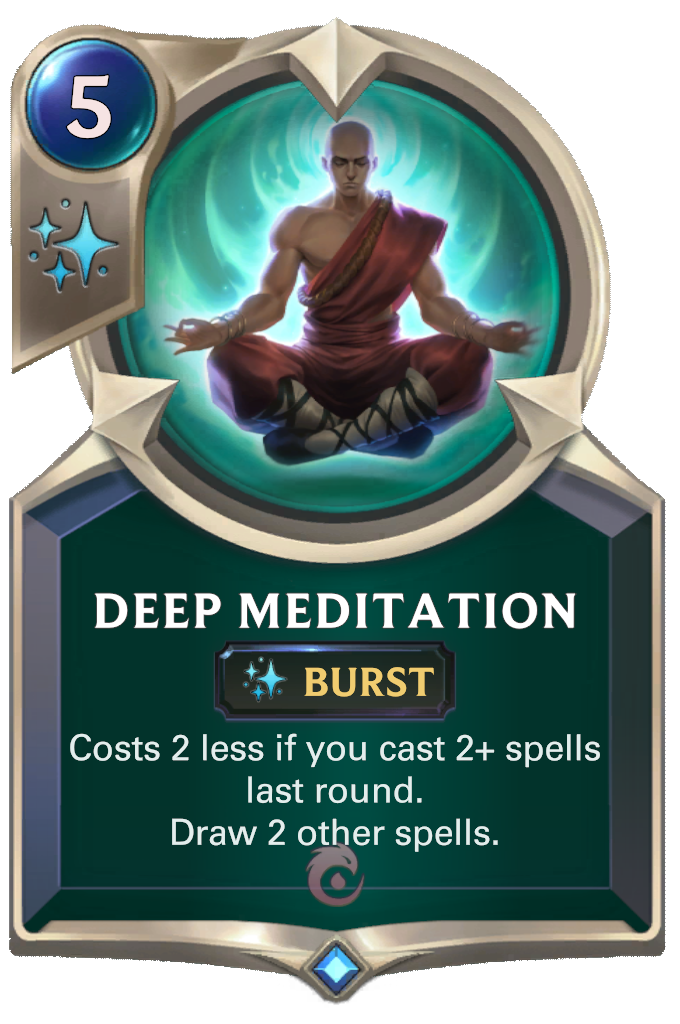 Deep Meditation provided too much overall value at its old cost, offering high redundancy, card advantage, and consistent spellcasting. While this card should be a high-performer in dedicated spell decks, it was doing a bit too much all around, even at its regularly-costed “floor.” Given that Ionia has a large variety of efficient and powerful tools, we want the high access to them offered by Deep Meditation to be more difficult for general Ionia decks to tap into. 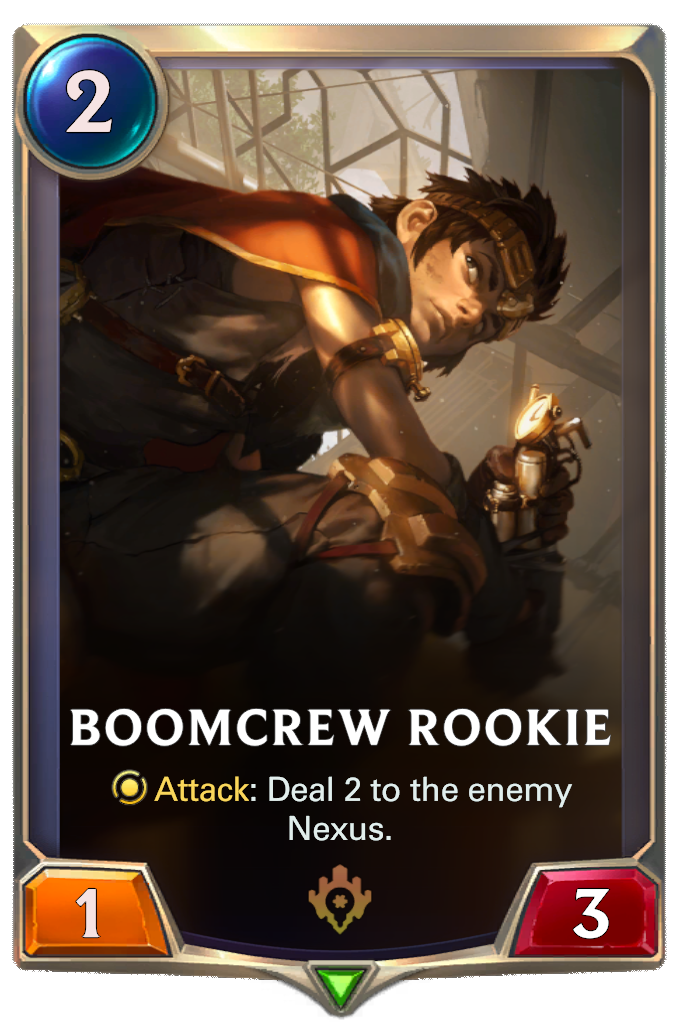 Boomcrew Rookie is a standout card in burn-based aggro decks, with its high health and attack trigger allowing for consistent Nexus damage over time. Decreasing its health makes the Rookie more answerable through both removal and combat, giving opponents a better shot at preventing multiple triggers from hitting their Nexus. 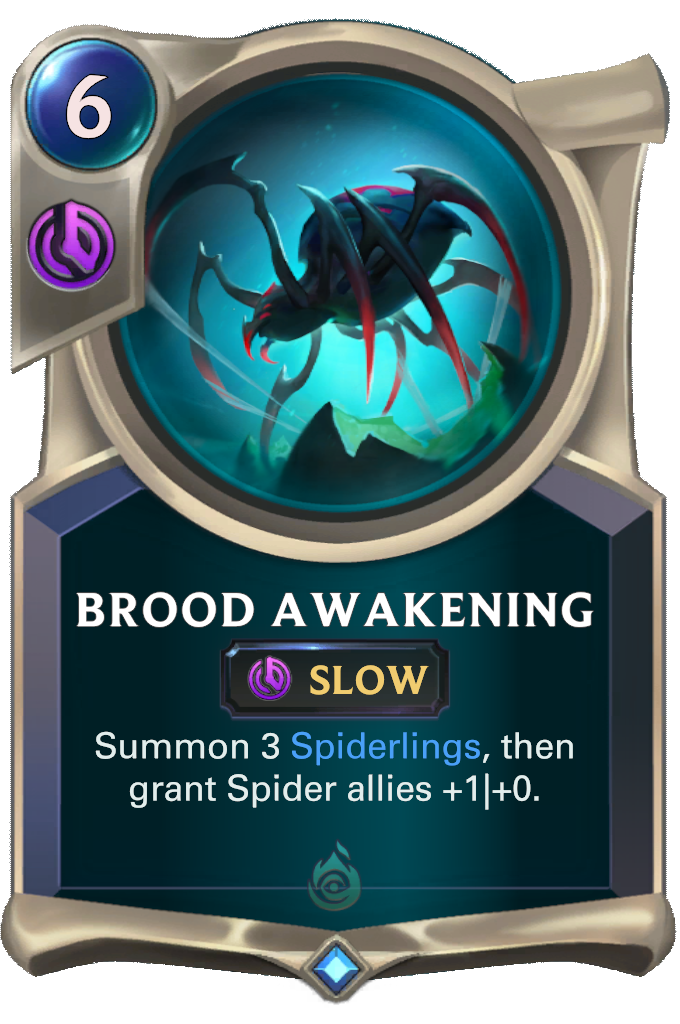 We’re reverting a change we made to Brood Awakening during beta, where we wanted to buff spider decks in the wake of nerfs to Mark of the Isles, Crowd Favorite and Frenzied Skitterer. In the end, this change overly pushed the raw efficiency of Brood Awakening, to the extent that it’s become overly potent as a defensive tool in control decks or “kill your own units” combo decks. 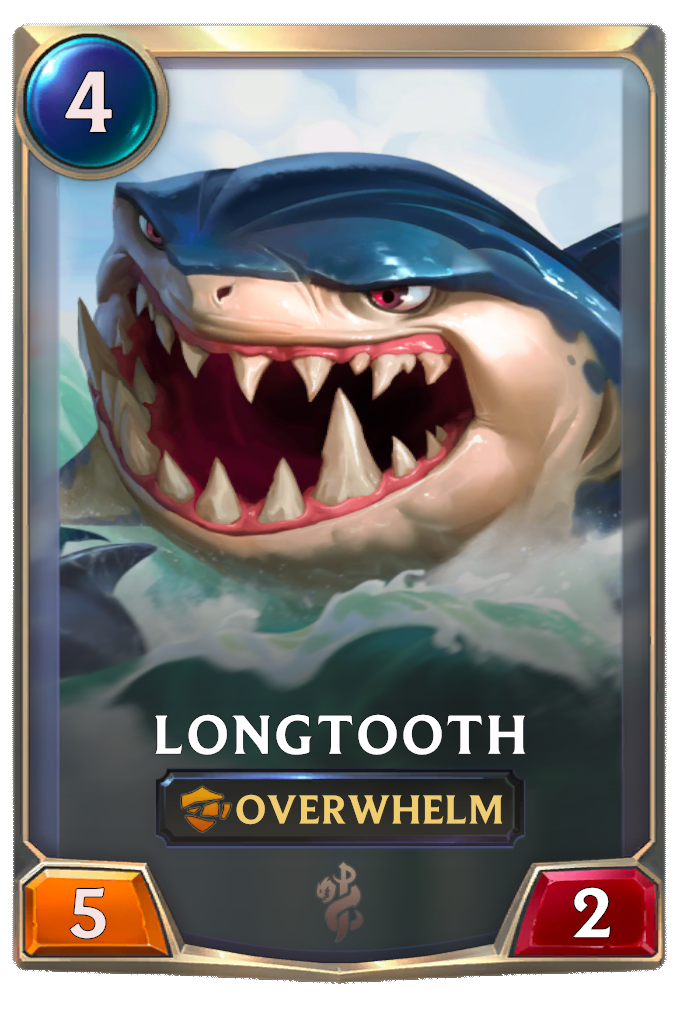 We’re adjusting Longtooth to allow Chum the Waters to be a bit less punishable and more reliable, especially in Expeditions where associated decks have been struggling. Chum the Waters can now also be played without an enemy unit in play—while this is actually a bugfix, it should allow for added versatility. 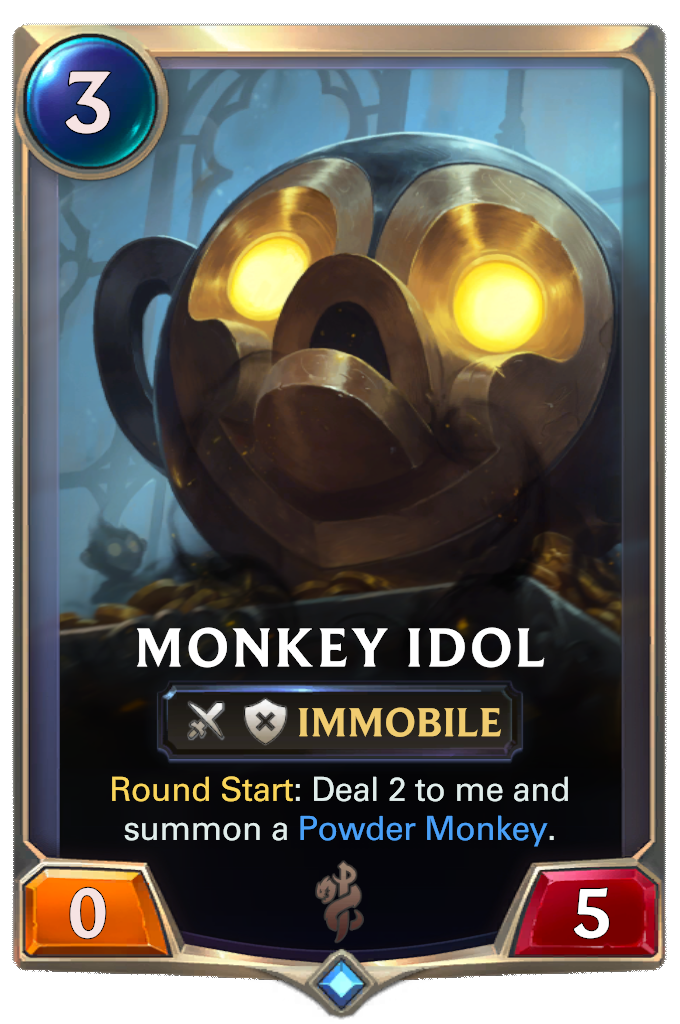 Giving Monkey Idol the potential to create another Monkey should make the effect more meaningful and create more interesting and satisfying decisions around when to play it. 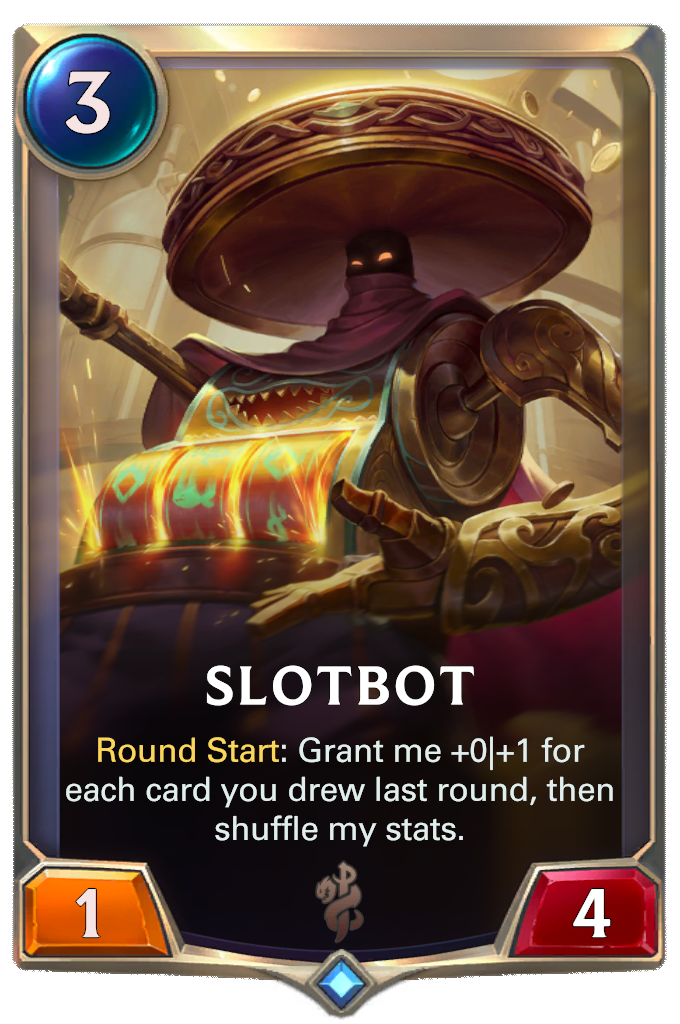 Unyielding Spirit has been among the more contentious cards in Rising Tides due to its powerful Burst speed effect and ability to circumvent opponents’ interaction. This card offers some unique challenges in adjusting, as a quick numbers change is more likely to just push the card out of playability rather than addressing any core issues, so for now we’re watchlisting it while considering adjustments.

Losing against your own cards when an opponent draws from your deck can be a frustrating experience, especially if you’re playing with deck-buffing Freljord effects. Pilfered Goods is a particular culprit as its power level is rather high, and drawing multiple cards is more likely to create “stole the perfect card” situations. We’re investigating possible adjustments that can ease some of the pain surrounding the mechanic.

Rising Tides thematics and mechanics (pirates, Plunder, Noxian siege weapons, etc.) have significantly increased the amount of direct nexus damage available to players. We’ve seen some problematic, potentially overloaded nexus damage decks arise as a result, and have made some targeted adjustments in this patch aimed at making early damage more preventable. Access to healing is another potential lever for the regions that boast it, and we’ve adjusted a few cards to provide better options.

The scope of this issue is rather large, so we’ll continue to monitor it (and the effect of the changes in this patch) over time.

We shared some thoughts on these two towards the end of beta, detailing some of our problems with their existing designs. We’ve adjusted Karma in this patch, and Ezreal has seen a drop in win rate since the release of Rising Tides, so at the moment we’re just continuing to monitor both champions