Hey everyone. We talked at the beginning of Open Beta about how we look at balance over the course of sets, including how we plan to approach our final card updates before the introduction of a new set. For this last batch of changes before launch, we’ve focused on tying up loose ends with some clarity improvements, fairly minor nerfs, and a few champion adjustments.

We expect champion health to be particularly important for us with set transitions—we want players to be excited to try out the new, but also for existing champions to remain compelling options. We feel pretty good about where we’re at, but have a few changes aimed at increasing viability. In particular, while we’re happy with where Noxus is as a Region in terms of overall card usage, Noxian champions in general are somewhat underrepresented, so we’ve got adjustments to Draven and Katarina.

Additionally, we’ve got a group of changes aimed at increasing clarity and generally helping cards act in more intuitive ways for both players. These changes will have some small level of impact on power level, but we’ve separated them into a different section below to make it clear what we’re trying to accomplish.

Thanks so much for all your feedback during beta, and can’t wait to see you at launch!

As you may have noticed by this point, we plan to pretty actively tweak various Expeditions values patch-over-patch based on the data we’re seeing. Our primary goal is that all archetypes feel viable, so you can make decisions based on the contents of the individual packs you’re shown rather than due to a particular strategy being overpowered.

At the moment, we think we’re in a pretty good spot, so many of the changes in this patch focus on mixing things up a little and refining some archetypes to be more satisfying to play. I’d like to share a little more info on some of the concepts and tuning values you’ll see mentioned in the changes below, and that we use to shape the overall Expeditions experience:

Bonus archetypes: Every combination of one or two regions has its own primary archetype, but we also have the capacity to support additional archetypes that are a bit more off the beaten path. Currently, these are Fluft and Tuft and Cataclysm, and we’re adding another with this patch—Crimson Guard. The main thing to note is that these bonus archetypes only show up half as often as the primary archetypes during the initial Champion Picks, so if you’re interested in trying them out, take ’em when you see ’em!

Cohesiveness Rating: Some archetypes are full of generically useful cards, while others like Shadows and Dust consist of mostly cards that are more dependent on one another. Cohesiveness Rating is a tuning value that allows us to control how quickly a particular archetype will be disallowed from showing up in Wild Picks when your deck doesn’t include any cards from that archetype, since you’d be highly unlikely to be interested in them anyway.

Wild Pick Bonus Chance: This is another tuning value that allows us to increase the frequency with which you’ll see an archetype during your Wild Picks, but only during drafts where it’s your primary archetype. So for an archetype like Shroom and Boom that’s dependent on having plenty of mushroom-related cards to end up with a synergistic deck, taking a couple packs from it early will ensure you’ll see lots more of them throughout the draft.

And there’s much more to come next patch, when Expeditions will be updated to include the new set and seventh region. We’ll add new primary archetypes for each of the new region pairings, so at least seven more archetypes added to the current total of 24, bringing the mode to over 30. When you take tri-region into account, there will be 63 different region combinations possible in Expeditions decks. The hype is real and I can’t wait for you all to see what we’ve been cooking up! 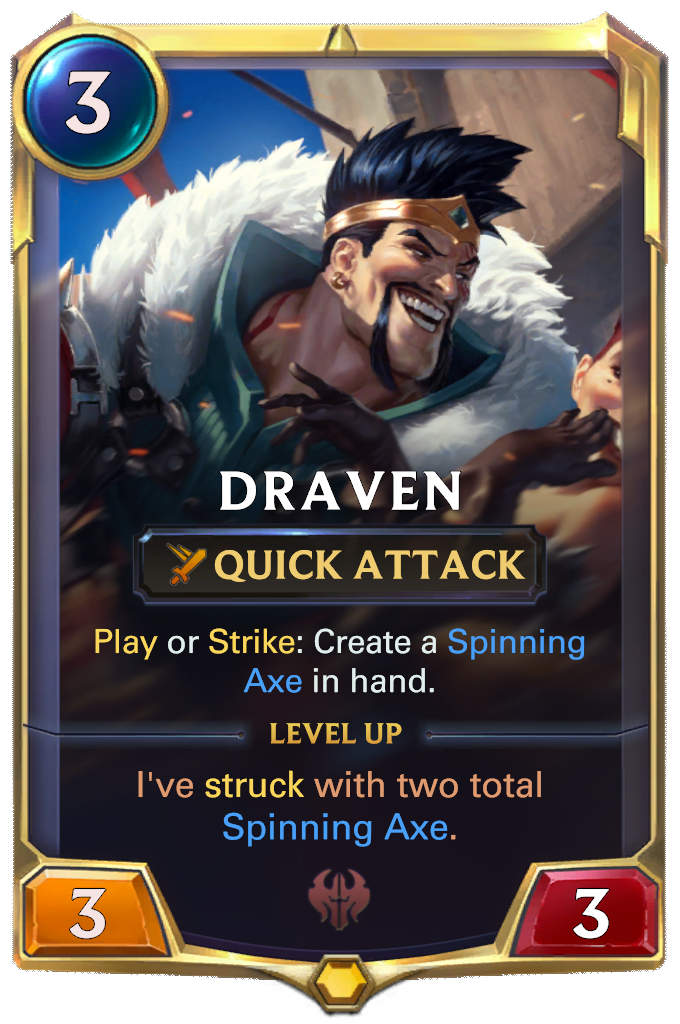 (Draven now levels up when striking with two Axes at the same time.)

This change focuses on making Draven’s gameplay dream and level up more realizable and satisfying. Draven’s overall playrate and satisfaction around his kit are lower than we’d like, even though we’ve seen him utilized effectively in certain strategies. We want to provide players with more windows and incentives to use Spinning Axes on Draven himself, in addition to rummaging them away or pumping other units. 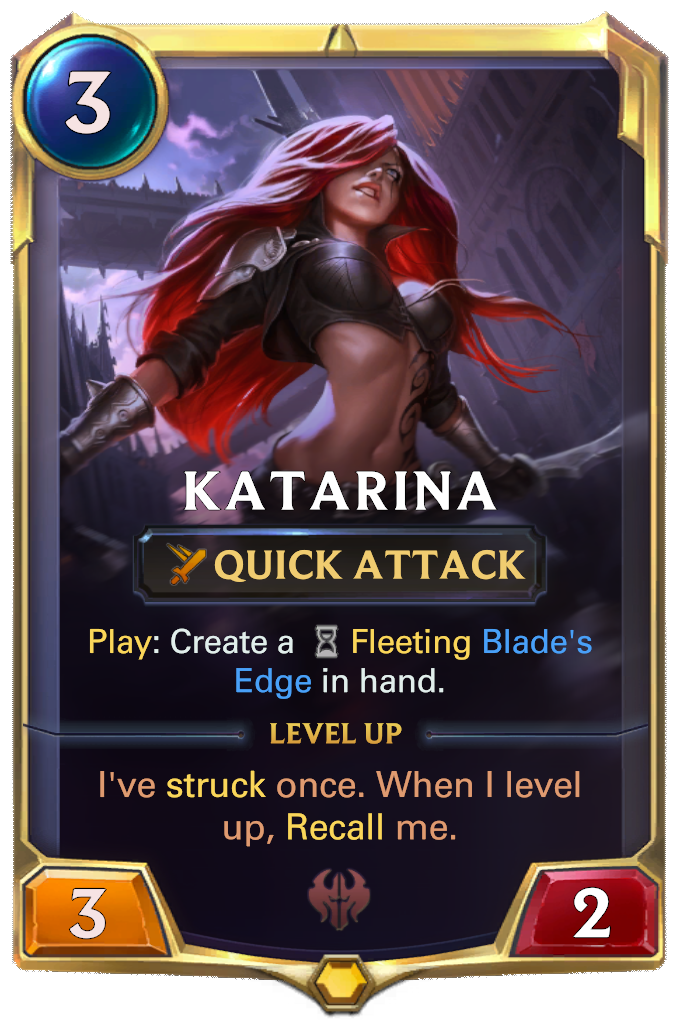 Old text: Level Up: I’ve struck once. When I level up, recall me.

New text: Play: Create a [Fleeting] Blade’s Edge in hand. Level Up: I’ve struck once. When I level up, recall me.

We want to give Katarina a slight increase in versatility and usability while addressing a fundamental problem within her play pattern. Trying to use her early can be ineffective as her self-recall leaves you too far behind in the game. In addition to improving her resonance, her new ability should both up Katarina’s power in her current decks and allow her to be played in a wider variety of strategies. 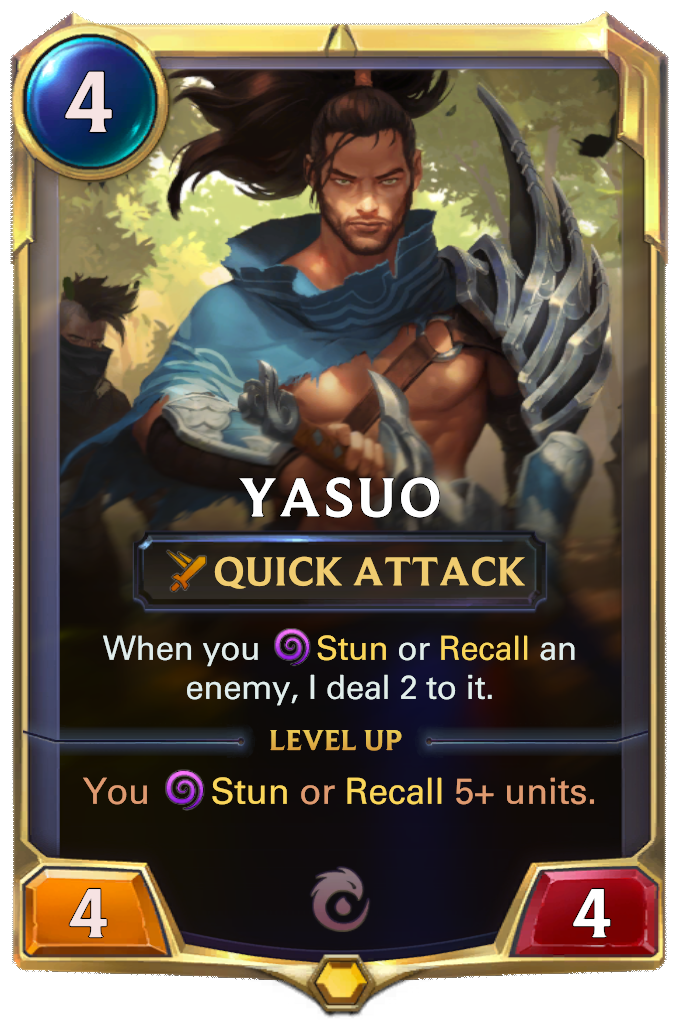 Yasuo hasn’t quite had the durability needed to be able to fully utilize him as a build-around. For a champion all about dicing up opponents, his statline made it difficult to confidently use him in combat, and this change should make Yasuo more consistently usable throughout games. 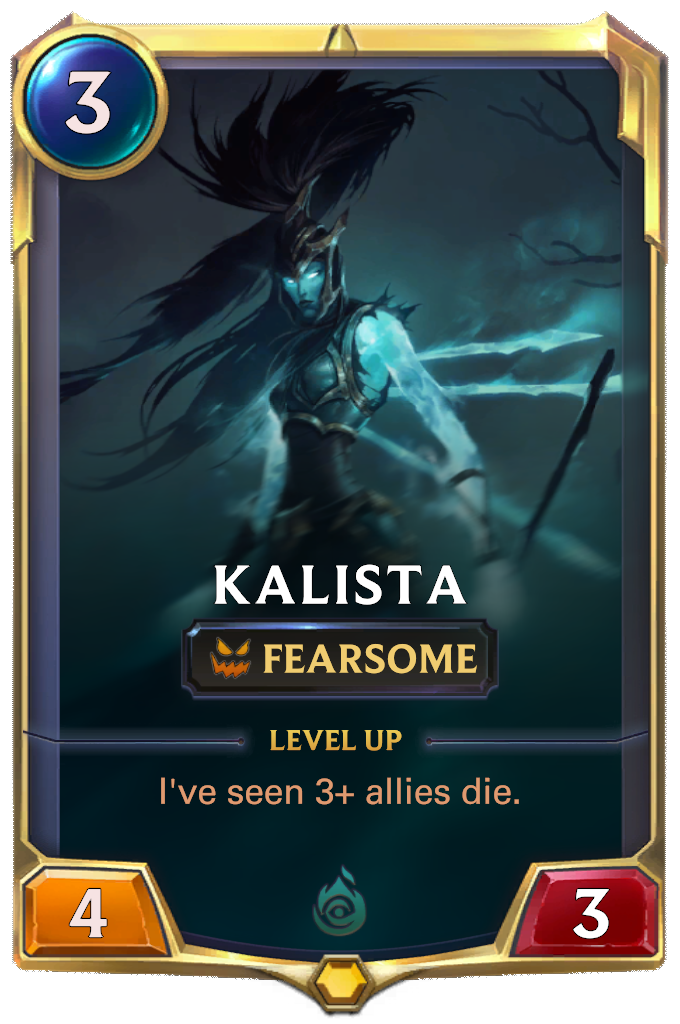 While we’ve seen Kalista’s playrate skyrocket since her update last balance patch, we’ve observed that her power level is still a tad low. We expected this might be the case—we want to initially focus on gameplay dreams when reworking champions—so we’re making a pre-planned follow-up change to make her level up more consistently attainable. 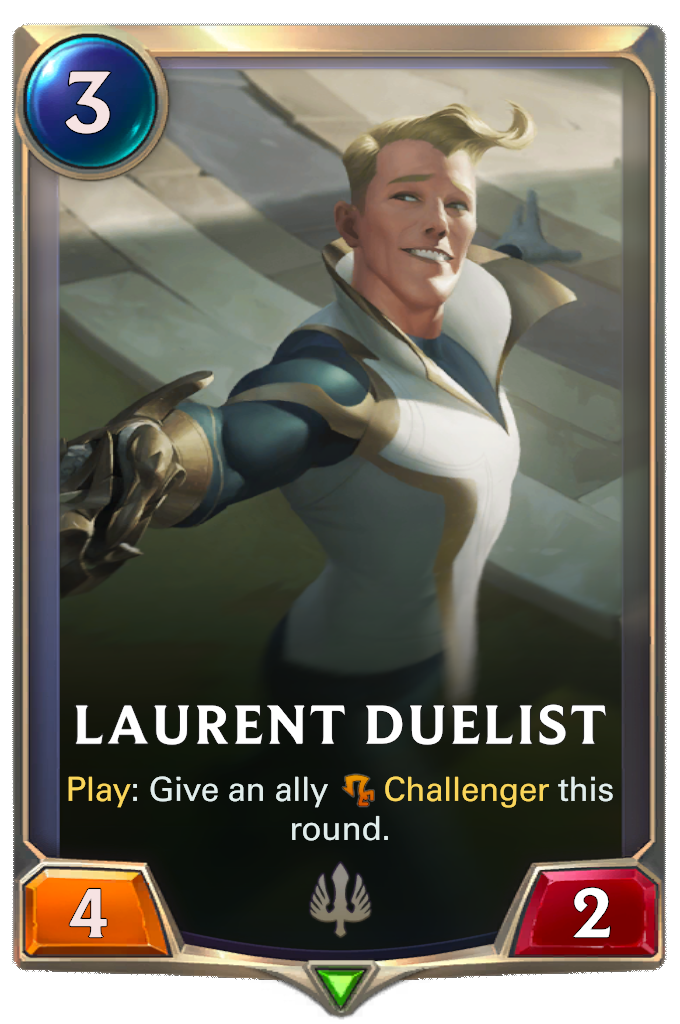 We want Laurent Duelist to be a meaningful threat you can send in along with whoever he’s given Challenger, but his old statline often didn’t allow you to set up profitable attacks. An additional point of power should help with more aggressive use. 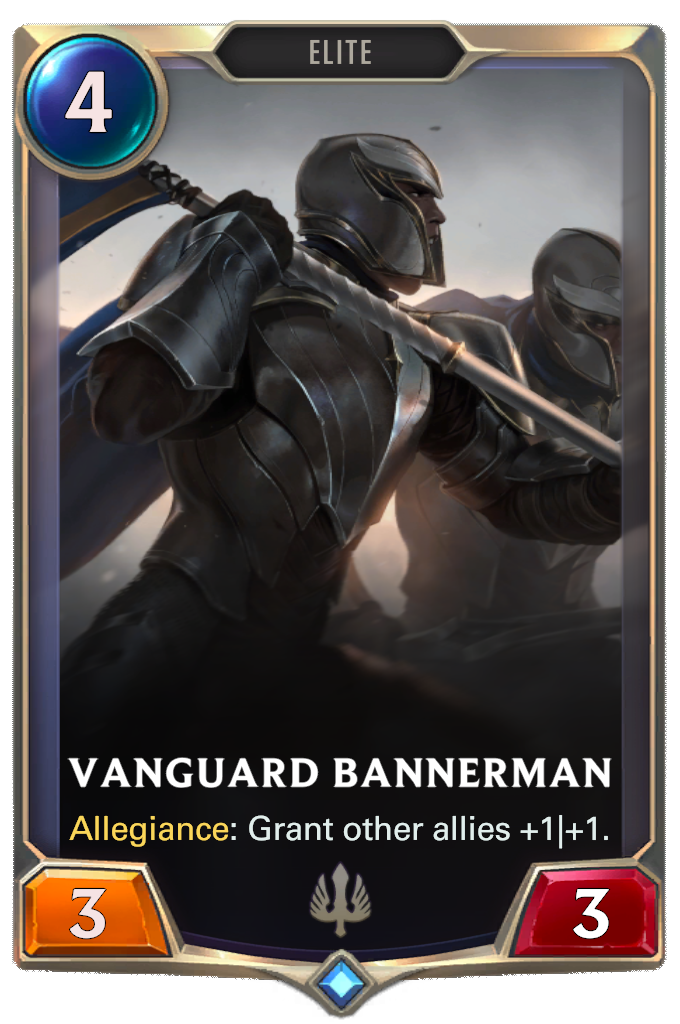 Demacia can have overpowering curves that leave certain strategies unable to compete. Bannerman is a key offender that also homogenizes Demacia deck diversity due to its allegiance requirements, so we’re removing some raw baseline power from its effect. 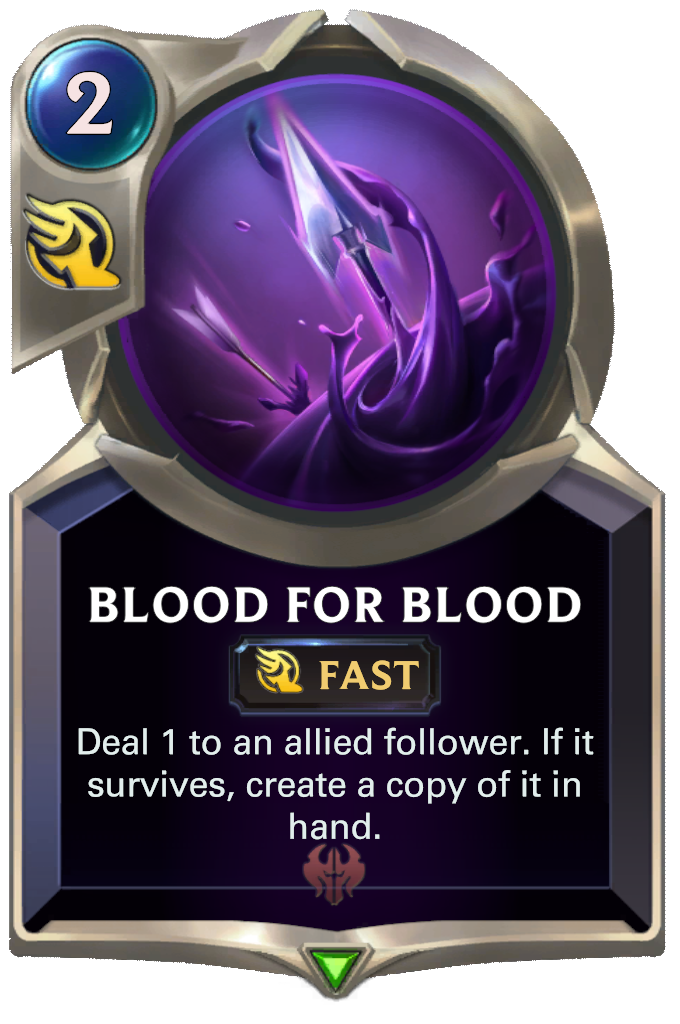 Blood for Blood has been ineffective even in Battle Scars decks, and a cost reduction should help move it into a more usable state. 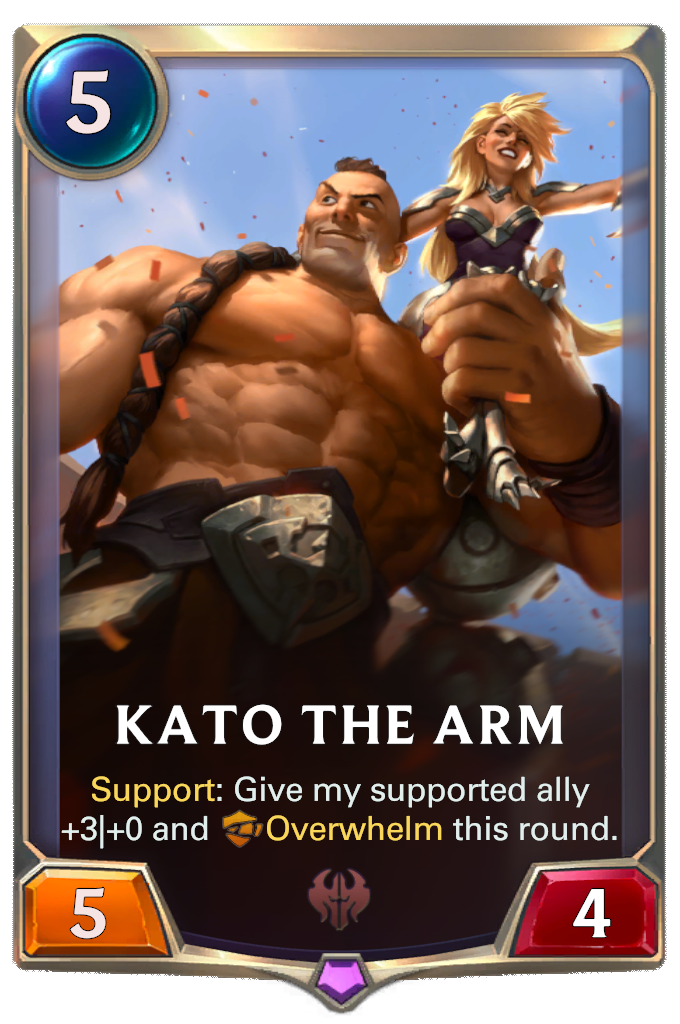 Aggressive Noxus decks often forgo playing the more expensive Noxus units—it can be risky for an aggro deck to try and play single large units before combat later in the game, as opposed to just playing more cheap units or spells that can be used during or after combat. One thing more expensive units can bring to the table is the potential for sustained payoff, and this health increase should improve Kato’s reliability by letting him make more attacks on average. 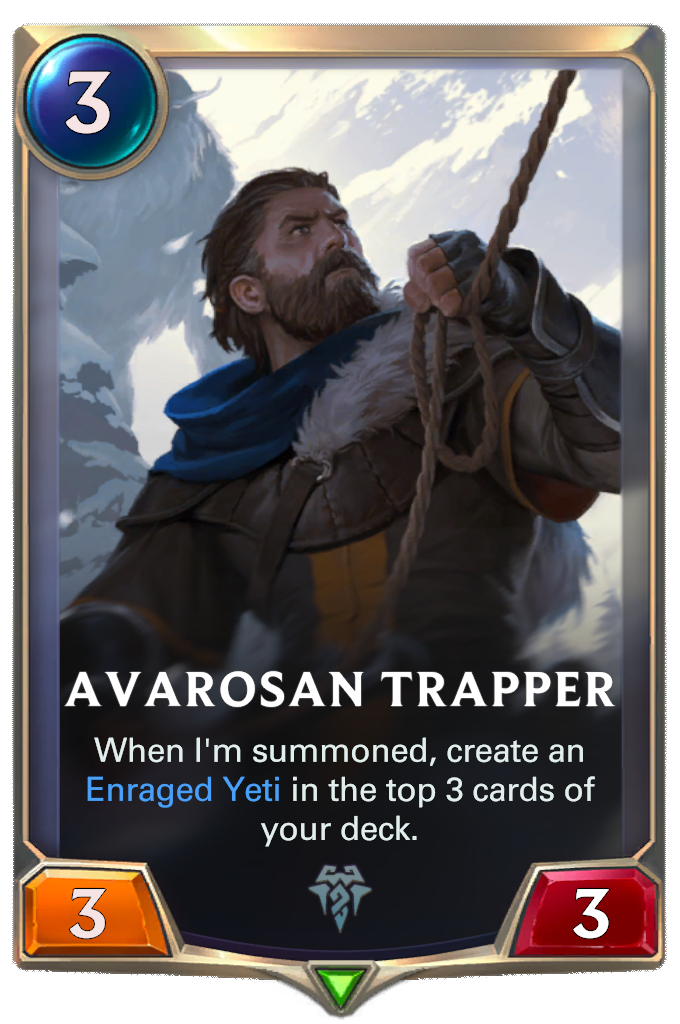 We want to give Freljord more choice when it comes to early/mid game options and boost regional identity across its various archetypes, so we’ve got buffs aimed at Yetis, Deck Buff, and Ramp. 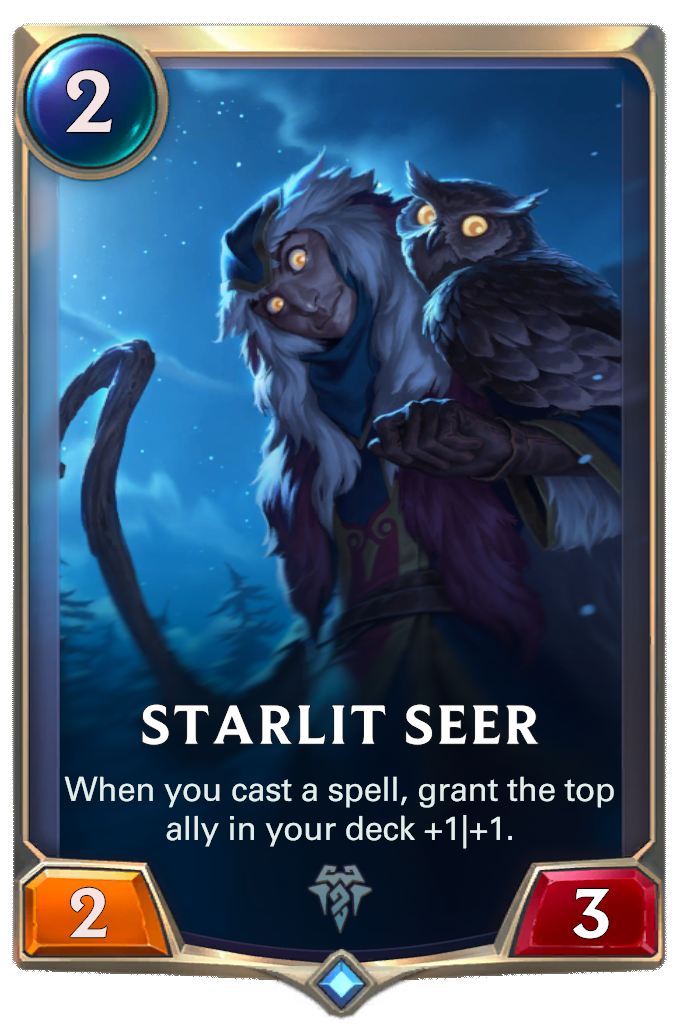 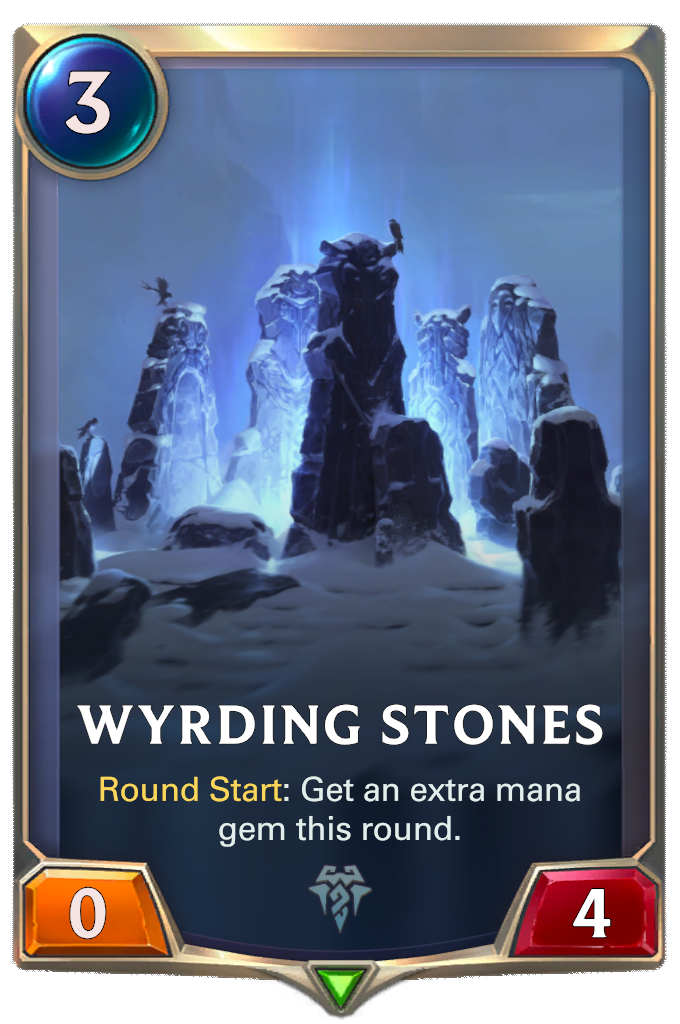 Ramp is an integral part of Freljord’s identity, and we’ve kept a close eye on the available options throughout beta. Currently, we’re observing most “big Freljord” decks forgo ramp completely, or playing only Catalyst of Aeons if they do opt for it. To make Wyrding Stones a more compelling option, we’re reverting a change we made back at the start of open beta. 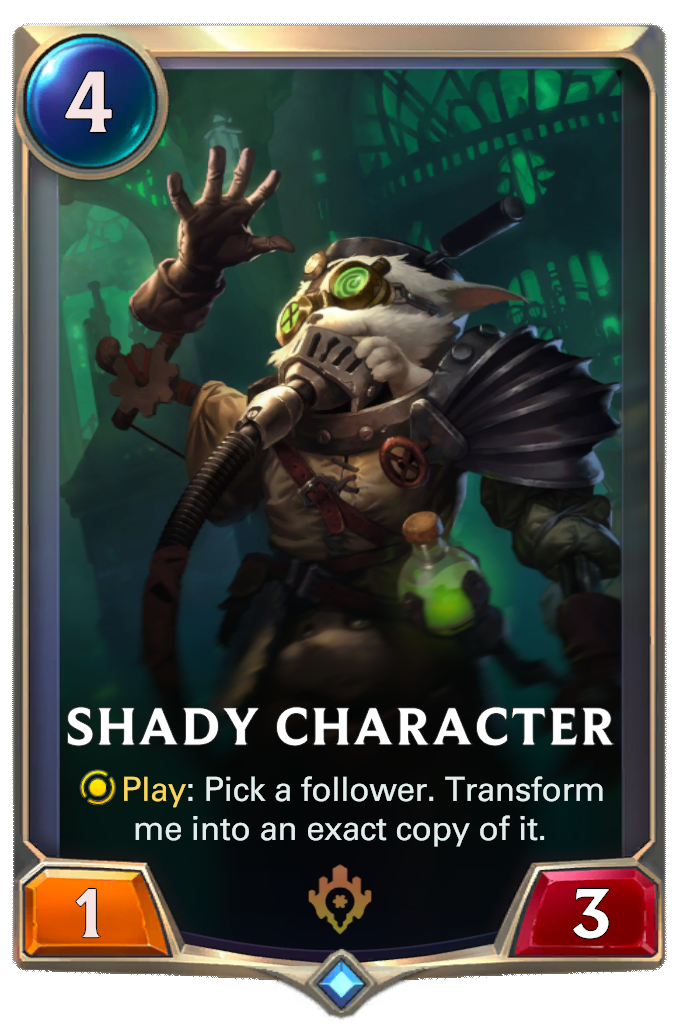 Shady Character’s statline made it too easy to disrupt with damage-based removal in response to the Impersonate. 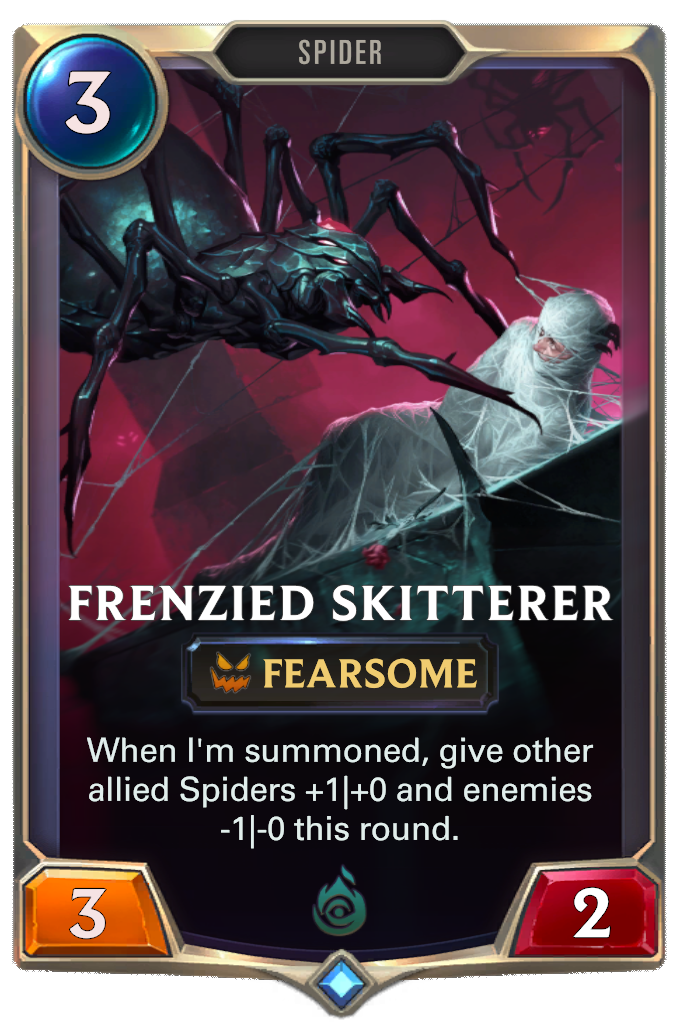 Skitterer’s summon effect is potent in all stages of the game, and many strategies beyond just Spider or Fearsome decks have been utilizing the card to great effect, particularly more controlling Shadow Isles decks. Ultimately, the card’s been a bit too ubiquitous, and a health reduction should generally rein in its strength and make it a slightly less flexible defensive option.