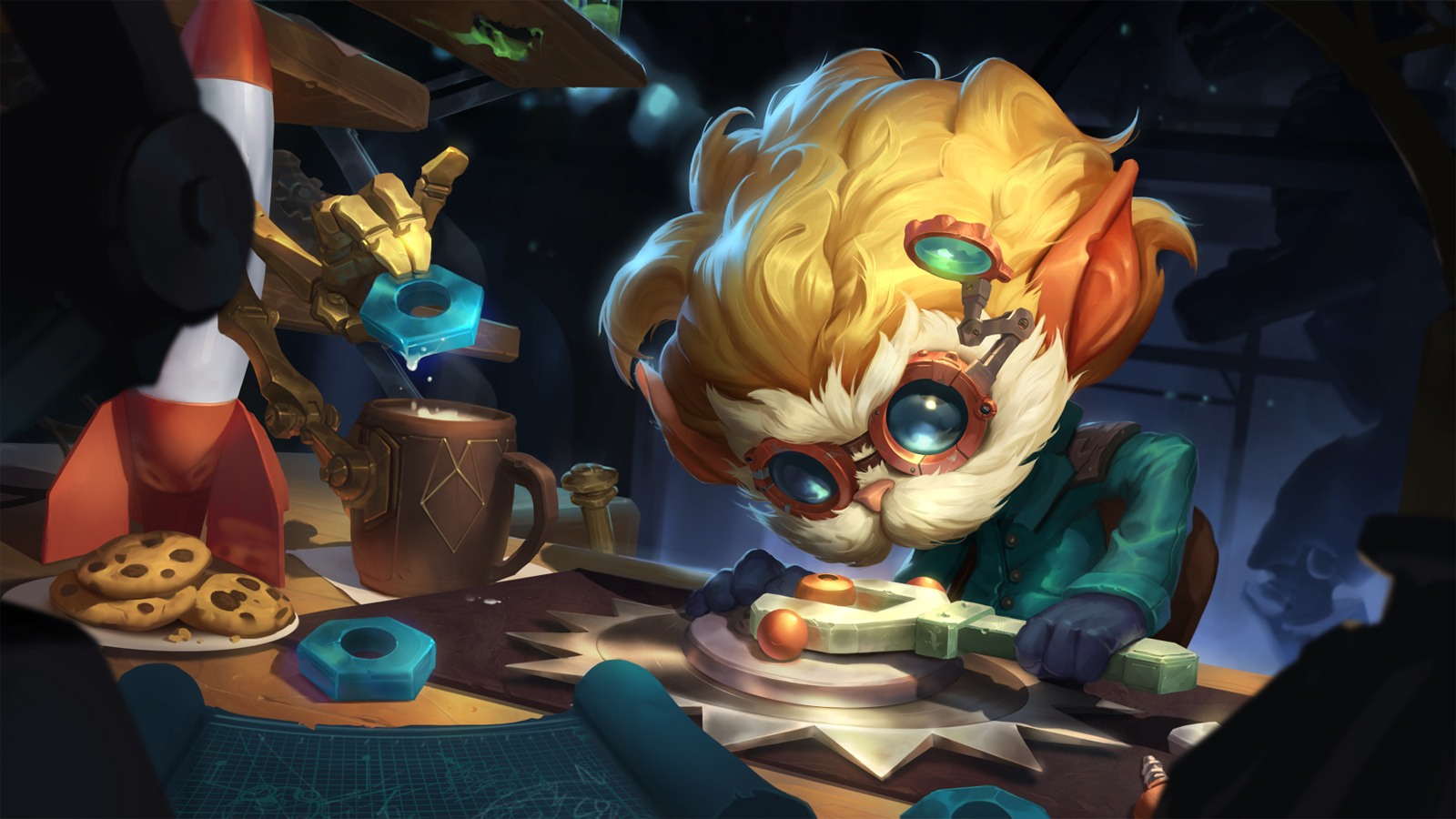 Hey folks. I’m Exis, though I think some of you know me better by my profile picture. Officially speaking I’m LoR’s Gameplay Engineering Lead, but I also run the Labs team. I’d like to talk a bit about where Labs came from, what Labs is, and how it’s changing in 2021!

When a game finally gets released to players like LoR did last year, there’s a pretty significant gear change toward live operations. Suddenly you’ve got a living, breathing game you need to keep running 24/7, a bunch of bugs you need to fix, and a ton of new players eager for more: more cards, more events, more boards, more emotes, more everything!

It’s incredibly exciting, but it can also make it hard to try new things. You’ve created expectations with players (and with yourself) about the quality and polish of your game. If you want to add something new and different, like a new feature, card mechanic, or game mode, it takes a really long time to get that new thing up to the same level of quality and polish to meet those expectations. Even if you can find all that time, what if your new thing… doesn’t quite hit the mark? Even worse, what if your new thing is… well… bad?

All that cost and all that risk can be paralyzing. It can make a game much slower to try new things once it goes live, or even stop it from evolving entirely! Enter: Labs.

We knew that once LoR went live, we’d have our hands full. But we also wanted LoR to keep growing and changing, and that’s where the idea for Labs came from: what if we could make it really easy (relatively speaking) to try new stuff in our live game?

The Labs proposal was simple. Let’s rope off a corner of our game, put giant “UNDER CONSTRUCTION” signs around it, and make it really clear to players that this is a section of LoR dedicated to experimentation. Let’s trust players to understand that not everything will be perfect, and take them on that R&D journey with us. Rather than feeling like we have to meet their expectations, let’s embrace our live playerbase as a huge resource for feedback, positive and otherwise!

The Labs team was officially formed almost exactly a year ago, in April 2020, with a mission to deliver on that model for live R&D. It’s a surprisingly small team that focuses on executing really fast, building experiences centered around very specific goals that will prove (or disprove) theories about where our game might go next.

Sometimes we’re testing a whole new game mode. Sometimes it’s as narrow as a new type of card content, or as nuanced as a style of play. Whatever the experiment, it’s always performed with the same mindset: we’re going to try lots of things, knowing that not all of them will be winners, and some will be awful. But a few will be great. And when we find those especially promising threads, we’ll listen to what players think about them and start to follow them wherever they may lead!

Last year we wanted to get really good at this model, so we practiced a lot with smaller experiments. We released a new Lab every single patch, and learned a ton about the tools and skills we need to build Labs well. Now, in 2021, we feel like we’re ready to focus our efforts into some bigger Labs, and a pair of bigger challenges: PVE and 2v2.

There are some player experiences LoR doesn’t provide today, though we believe it could. One of the foremost examples is that you don’t get to feel like you’re growing stronger over time. No matter how much you succeed with your deck, it doesn’t get any more powerful when you take it into your next match, even though you may be improving as a player. You don’t get to level up and earn a new skill, or gain higher stats for the next fight. You don’t get to feel the satisfaction of equipping a new item, seeing how badass it looks on your character, and wielding it to your advantage. That experience of power progression is one that lots of games provide in one form or another, because it can be satisfying and exciting as a player. But you don’t quite have it in LoR. Yet.

Now, the constraints of LoR’s carefully balanced PVP ecosystem make it a challenge to express power progression. But ever since the Journey to the Peak Lab last year, we’ve been excited to explore it through PVE modes instead. The AI doesn’t care about balance. I can come into the match with a totally busted deck, and my PVE opponent won’t mind… in fact, it may have a few unfair tricks up its own sleeve. And PVE modes let us create lower-stress play experiences, tell more stories about Runeterra and its inhabitants, and more.

The question we want to answer: Can we use LoR’s existing gameplay rules and existing cards to create a compelling PVE experience that satisfies those needs? And could that experience be a permanent mode someday, with regular content updates just like our VS modes?

It’s clear to us that the Lab of Legends formula deserves to be elaborated on. We’re going to keep exploring incremental improvements to the existing Lab, like the ones we made a few patches ago to add difficulty tiers, rerolls, and run summaries. But we also think there are more parts of the power progression and PVE space that LoR can (and should) explore, so stay tuned for another major step forward coming in the next few months. We’re on a journey with a clear goal: we want to create a permanent experience that players can keep coming back to for years to come.

The second half of our exploration this year is focused on giving LoR players ways to play together.

I have all these amazing moments in our game: nail-biting wins and heartbreaking losses, cunning outplays and (more) facepalm-inducing misplays. But sharing any of those moments with a friend can be tough, unless they’re watching over my shoulder or I happen to be streaming. Being able to play a game with my friends has become more and more important to me over time; sharing the game’s highs and lows with someone not only satisfies my social side, it amplifies all the most exciting moments for me. Luckily, we believe there are plenty of ways we could make the game more social, and LoR will be exploring a few of them this year.

Labs is contributing to that social effort by exploring multiplayer game modes. Now, multiplayer is a big space, with a lot of options for a card game. What if you could bring a friend with you into ranked, and grind together? Or should we recreate a MOBA-style 5v5, spread across a bunch of lanes? Or should LoR be the world’s first true battle royale card game?! Actually, the 5v5 thing sounds pretty cool. But for now, we’re focusing our efforts on 2v2 modes.

We think 2v2 hits a sort of “sweet spot.” It’s a closely cooperative experience where we can be invested in one another’s success. It’s not too hard to organize and find time for, since I just need one friend to jump into queue with me. And it’s something the Labs team can get up and running (and iterate on) pretty quickly, letting us take in feedback and make improvements much faster than a more complex co-op more right out of the gate..

We’ve already learned a lot about how our game translates into a 2v2 world, and we think we’re on the right trail. Playing LoR with a friend or three is fun, in the way we hoped it would be when we started theorizing about social gameplay. There’s a bunch of work to do to find the right set of mechanics and player dynamics, but we’re optimistic that with the right recipe, LoR could be just as engaging (and competitive) with a friend as it is solo.

These are big challenges for a game that’s been built around 1v1 PVP competitive for so long,but we believe in the Labs formula to create the best PVE and 2v2 experiences possible. We’re committed to moving fast, trying ambitious stuff, and listening eagerly to input from you all as we charge forward. We can’t be sure exactly where we’ll land, but we’re excited for the destination and the journey.

I’ll end with a quick thank you to the talented developers on the Labs team who let me coax them onto this wild ride, and whose hard work and creativity fuels every single Lab we make. And a less-quick thank you to the players, for playing LoR, for playing Labs, and for joining us in shaping this game we’re building together. We’re lucky to have such an exceptional community traveling with us, and we hope you’ll love where we head next.